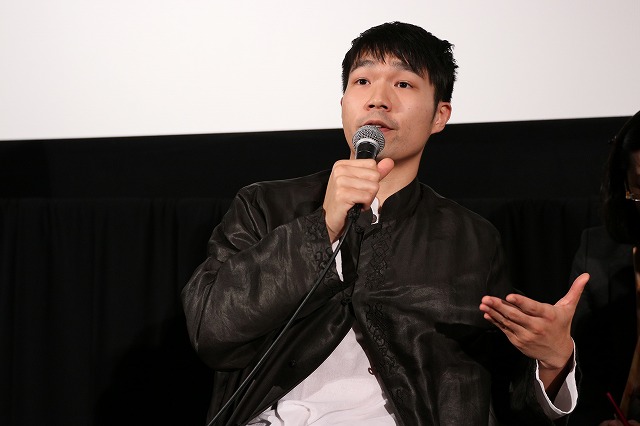 A seemingly prototypical family man reveals all is not as it seems in Hong Kong film Tracey, which had its world premiere in the 31st TIFF Asian Future section.

On October 31, director Jun Li participated in a Q&A session in which he told viewers he hoped that “the film changed something inside you.”

Tracey centers around middle-aged Tai-hung (Philip Keung), who, with a stable career, wife, two children and a dog, seems to be the very picture of “normal.” Under the surface, though, Tai-hung is tormented by a fact he’s never shared with anyone: he has identified as a woman since a young age.

Tai-hung has resigned himself to life as a man, his only release being to secretly wear women’s underwear underneath his clothes. But one day, he gets a call informing him that childhood friend (and onetime crush) Ching, a war photographer, has died in Syria.

Soon, Ching’s spouse arrives in Hong Kong to lay Ching to rest, and is, to the surprise of Tai-hung, a man. Along with Ching’s remains, that man, Bond (River Huang) brings with him progressive ideas about LGBT issues. With Bond’s help, Tai-hung slowly begins to reveal his true identity—and along the way, reconnects with another childhood acquaintance, an older transgender man who Tai-hung witnessed being discriminated against in his youth.

But while Bond and other friends have no trouble accepting his identity as a woman, it’s a different story when it comes to his wife, the family’s conservative matriarch (Kara Wai), and even his son (Ng Siu-hin), who professes to be more liberal-minded than his mother. The question of whether Tai-hung will be able to convince his family, friends and Hong Kong society at large to accept his new identity — as the titular Tracey — forms the core of the film.

During the Q&A session, the director heard multiple members of the audience reveal that this was their second time watching Tracey over the course of the festival. One of them asked Li why he decided to make the film.

“I thought it was about time for a transgender film in Hong Kong,” responded the director. “The producer asked if I wanted to do it and I said yes immediately.” Li continued: “I think a lot more films like this will start to appear, and cover different LGBT-related issues. This film is just the story of one person, and certainly doesn’t cover it all. After all, this isn’t something out of the ordinary… minorities are a part of our everyday lives.”

Another audience member praised the film, but questioned a scene in which Bond, the younger husband of Tai-hung’s friend Ching, pushes Tai-hung to come out to another friend. Wasn’t this a form of “outing,” if a mild one?

“I think Tai-hung wanted to come out, but didn’t know how, so Bond was a source of help,” Li responded, but added, “but you’re quite right in noting that maybe Bond didn’t think enough about Tai-hung’s feelings. Sometimes those in the younger generation don’t think of others enough… that includes Bond, but also Tai-hung’s son.”

Indeed, while Tracey’s major theme is that of transgender issues, another is communication — or the lack thereof — between generations, from the elder man who identifies as a woman but has, as Tai-hung surmises, “probably never heard the word transgender,” to his son, whose supposedly liberal views get a serious test when he learns his father identifies as female.

Communication is never easy, but with Tracey, Li has made a moving argument that life is better for everyone when we listen to each other.