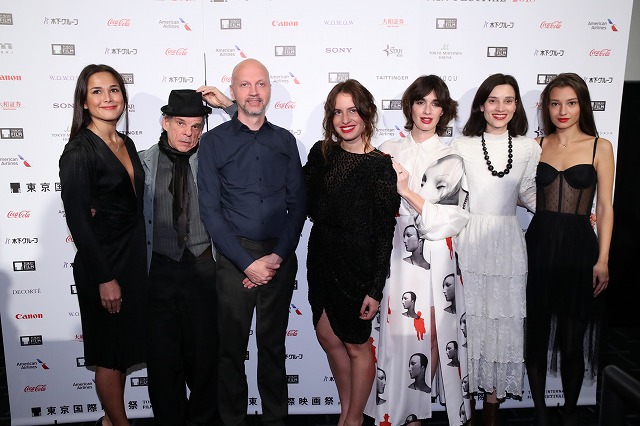 Gallantry is not dead in the absurd world depicted in the German-Azerbaijan co-production, The Bra, which screened in the Competition section of the 31st TIFF on October 31. In the film, a retired engineer (Miki Manojlovic) is making his final trip on his freight train before retirement, on a track through a very cramped, public space in a rural town. The train snags a blue bra from a clothesline by accident, and he decides to try and find its owner. The quest becomes a kind of kinky Cinderella story, but from the prince’s point of view, as the engineer takes the titular undergarment to women in the town to try on.

Some find him odd, while others take up the challenge, often in a pique of vanity, and then find that it doesn’t fit. Though it’s obvious the engineer has no salacious intentions, the other men in town, mostly husbands of the women he visits, are understandably upset and take matters into their own hands, vigilante style.

But he’s not a pervert. He’s simply an older man who is trying to do the right thing, even if that involves some dodgy behavior, like crawling through a sleeping woman’s window to measure her bust; or impersonating a doctor who is administering breast cancer screening tests.

Director Veit Helmer showed up for the post-screening press conference, but in a surprise, so did six of the actors from the international cast who represented five different countries. This may make it sound as if it was difficult to communicate within the movie, but since the film is completely dialogue-free, there was no need to translate the lines.

“To quote Alfred Hitchcock,” said Helmer, “words in a movie tend to be lost on the audience. It’s hard to tell a story without words, but if you can conceive of one that makes you forget there is no dialogue, I think you can create a new experience for the viewer. But this is not a silent film. It has sound and music. It can be shown anywhere in the world without dubbing or subtitles. It’s truly a universal film.”

The immediacy of The Bra comes down to the shooting style, which, as Helmer described it, was created under “guerrilla” circumstances. Spanish actress Paz Vega described the shoot as “thrilling and dangerous. We had to shoot the train scenes with a real train coming through those narrow spaces. They came by every 20 minutes, so it was very stressful, but also exciting.”

Helmer said he prefers “analog to digital” technology, which is why he loved these trains—huge, hulking monstrosities from the Soviet era. “We built the whole movie around the idea of these immense machines moving through this tiny neighborhood. It’s shocking to watch, actually.”

French actor Denis Lavant (star of many films by Leos Carax), who plays the engineer’s apprentice, has worked with Helmer in the past. When asked if the director’s style has changed much, he answered, “He never changes, which must be difficult because it’s often impossible to keep up with his energy.”

Energy was apparently hard to maintain, since the location was more than 2,000 meters above sea level. As Helmer explained, “In the village where the engineer lived, there was only one shower for the whole cast and crew. We had to bring everything up there because they had nothing, and then we had to finish all the scenes before the snow came.”

French actress Frankie Wallach talked a bit about the subject and how the town reacted to their presence. “There’s a scene where I have to dance half-naked, and at one point that intelligence spread throughout the town, causing quite a scandal, which led to another visit from the police.”