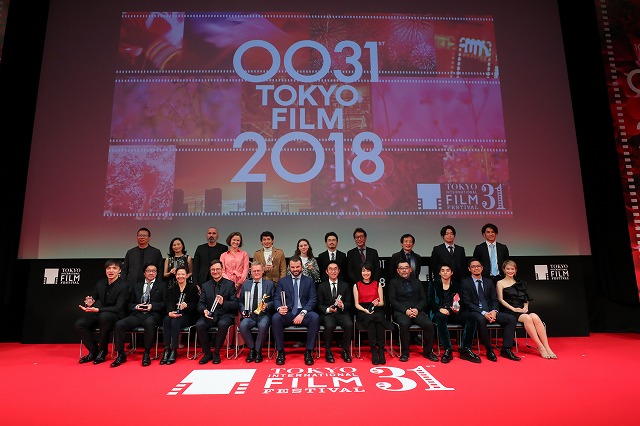 The 31st Tokyo International Film Festival held the Award Ceremony on November 2 that highlighted a vast and diverse lineup of films from Japan and around the world.

The ceremony, which took place at EX Theater Roppongi, began with the announcement of the winners of the Tokyo Gemstone Award, established last year to honor up-and-coming actors and actresses. The recipients of the second annual award were Mai Kiryu (Lying to Mom, The Chrysanthemum and the Guillotine), Lien Binh Phat (The Tap Box), Karelle Tremblay (The Fireflies Are Gone), and Nijiro Murakami (The Gun).

Kiryu, who appeared in not one but two films at this year’s TIFF, thanked the cast and crew of both, stating, “I consider this an award for everyone who worked on those films.”

Lien Binh Phat, the Vietnamese actor who earned praise for his theatrical debut in The Tap Box, commented, “It’s because of The Tap Box that I’m here on stage… I’m thankful to the film from the bottom of my heart.”

Karelle Tremblay, a rising Canadian star who appeared as a troubled teen in The Fireflies Are Gone, stated that TIFF offered two firsts: not only was it the first time for the actress to win an award, it was the first time for her to travel to Japan. The actress added: “I’m honored and excited to be here.”

Nijiro Murakami, who played a disturbed university student in psychological thriller The Gun, shared that he first met the producer of the film at TIFF three years ago. “It feels like fate to be standing here now,” said the actor.

With that, the award went to veteran Masaharu Take for The Gun and first-time director Seiji Tanaka for Melancholic. Taking to the stage, Take remarked that, much like Nijiro Murakami, he had the chance to meet the producer of The Gun at the festival three years ago, adding, “I had no idea I’d be here three years later with a film produced by him.”

Tanaka took the stage next, revealing that Melancholic was actually completed on the very day of the deadline for TIFF. He thanked the entire cast and crew, and “everyone who will see it in the future.”

Jury member Bertolin praised the film for its “striking maturity in the way it deals with complex themes,” and “its inventive and poignant portrait of family relationships.”

Accepting the award, first-time director Katsumi Nojiri remarked, “I started writing the screenplay four years ago, and never imagined four years later I’d be standing here. An older director I know told me a director isn’t something you become, it’s something that the people around you allow you to become. I want to thank my cast and crew for allowing me to become a director.”

Next, the ceremony moved on to the Asian Future section. First up was the Spirit of Asia Award by the Japan Foundation Asia Center, given to director Huang Huang for his film Wushu Orphan, which centers around the relationship between a teacher and student in the rural China of the 1990s.

Asian Future jury member Pete Teo praised Huang for his “sophisticated visual and narrative style” and “breadth of cinematic vision,” and added that the jury is looking forward to his future work.

Huang, accepting the award, thanked the jury and TIFF filmgoers in English, Japanese and Chinese, adding, “I may someday become a part of the ‘Asian past,’ but for now, thank you for this Asian Future award.”

The next film in the Asian Future category, the Best Film Award, went to A First Farewell, the youth drama from debut director Lina Wang about a Muslim farm boy in China—and, as the title implies, a significant parting.

On stage, Wang revealed, “Actually, the little girl in the film was recently in a relay race, but didn’t win, so this is her win,” dedicating the award to her.

Next, the ceremony moved on to the main event: the winners of the festival’s Competition section. First came the Audience Award, which went to Another World, the drama about three old friends reconnecting, from director Junji Sakamoto.

“I was definitely not expecting to win,” commented Sakamoto after donning the award’s commemorative purple happi coat. “Thank you to all those who understood the film—and to those who didn’t.”

Next came the Best Screenplay Award by WOWOW, awarded to Amanda, the French drama about a family forever altered by a terrorist attack in Paris. The screenplay for Amanda was co-written by Maud Ameline and director Mikhaël Hers, the latter of whom joined the ceremony via video message to accept the award: “I want to dedicate this to Maud Ameline,” he said. “I wanted to create a portrait of Paris in all its fragility and beauty, and she was the perfect one to write it.”

Next up came the Award for Best Artistic Contribution. That award went to The White Crow, the Ralph Fiennes-directed biopic of ballet dancer Rudolf Nureyev. Producer Gabrielle Tana took to the stage, sharing that Fiennes had a wonderful time in Tokyo, and that the award was an honor.

“The film was a real labor of love,” Tana added, “and I think that’s reflected in it.”

The Competition award section then moved on to awards for individuals, beginning with the Award for Best Actor. That honor went to actor Jesper Christensen for his turn as a patriarch trying to do right by his family in the rural Denmark of the 1800s in Before the Frost.

Christensen, in a video message, commented that “Coming from Japan, one of my favorite film countries, this couldn’t be better. Have a wonderful evening—I know I will!”

Next, the Award for Best Actress, which went to Pina Turco for her performance in The Vice of Hope as a woman working as a prostitute whose life changes when she becomes pregnant. The intense performance was praised by Competition jury member Kaho Minami, who remarked, “These days, we hear women speak out for their rights, and we have learned many things from the lives of women in various movies. This year we saw the life of a wonderful woman. The complicated feelings displayed behind her eyes were unforgettable.”

Director Edoardo De Angelis accepted the award, while Turco joined the ceremony via video message, apologizing—to roars of approval from the audience—that the reason she had left Tokyo was to attend her sister’s wedding.

But Best Actress was not to be the only prize for The Vice of Hope. Edoardo De Angelis was quickly brought back to the stage as the winner of the next award, Best Director.

Said jury member Stanley Kwan of De Angelis: “I appreciate him being a director who truly showed real concern about his characters, with understanding and sympathy. He took us on an emotional journey alongside his characters.”

Said De Angelis, accepting the award and explaining his motivation for creating the film: “I’m interested in the moment on the precarious balance between life and death… one minute before death, you can find another way to live. That, for me, is a happy end.”

The Vice of Hope would not be the last film to win multiple awards: the penultimate award of the evening, the Special Jury Prize, went to Before the Frost, which had also received the Best Actor Award.

Jury member Bryan Burk praised the film, stating the jury saw “the director’s passion in every frame” and that the “performances remind you of the power of cinema.”

Taking the stage, surprised director Michael Noer started his speech by stating, “I like it when actors improvise on set, and now it looks like I’ll have to improvise a speech, but my heart will guide me through it.”

Before the Frost is first and foremost a story of a father. Noer revealed that his father passed away recently, and did not see the film, but he considered Jesper Christensen’s performance in the film “a version of my father.”

Finally, it was time for the festival’s most prestigious award: the Tokyo Grand Prix/The Governor of Tokyo Award. That honor went to the French drama Amanda, which moments earlier had also taken home the award for Best Screenplay.

Jury President Brilliante Ma Mendoza commented that Amanda is “a seemingly simple, but not simple film” and “a story of complex human emotions.”

In place of director Mikhaël Hers, the award was received by France’s Ambassador to Japan, Laurent Pic, who noted that, “Among French directors, Hers is often thought of as ‘the most Japanese.’”

Hers himself, again appearing via video message, stated: “I’m not used to winning awards, so to get two, much less the Grand Prix, is such an honor. I’m looking forward to the day when I can come back to Japan again.”

Jury president Mendoza then returned to share his thoughts on the festival overall:

“We the jury had such a good time together. The past few days, it was quite challenging to choose the winners because of the vast diversity of the films.” He added thanks to those behind the scenes, like assistant directors, production managers and more, as well as TIFF’s volunteer staff for their “kindness, hospitality and warmth.”

Finally, TIFF Festival Director Takeo Hisamatsu took to the stage to wrap up the ceremony, telling the winners: “It would give me the utmost pleasure if these awards help you boost your career in the future.” He also noted that over the course of the festival, he was able to see filmmakers and film fans in communication, “expanding the circle of friendship. That, I believe, is one of the most important achievements for the festival.”

Hisamatsu also reminded the audience that the festival isn’t over quite yet: Closing Film GODZILLA: The Planet Eater will play November 3 as part of a day-long Godzilla Fest event celebrating the 65th birthday of the world-famous Japanese monster.

The Festival Director concluded by thanking the Japanese film industry, Tokyo government, sponsor corporations and the “over 300 volunteers” for the success of the 31st Tokyo International Film Festival. The director promised the TIFF team would continue “to work hard to bring you all an even more attractive film festival in the years to come.”

The 31st Tokyo International Film Festival attracted an audience of 62,125, and 164,000 total visitors to allied events, while screening a total of 181 films.