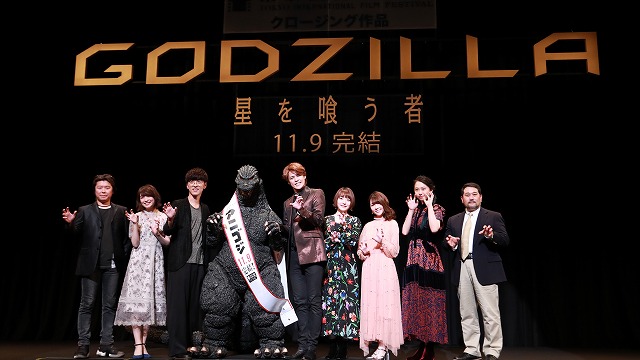 The 31st TIFF came to an end on November 3 with a giant-sized event celebrating Godzilla’s birthday.

GODZILLA: The Planet Eater was screened at Tokyo International Forum, serving not just as TIFF’s Closing Film, but as the centerpiece of Godzilla Fest 2018, a festival devoted to Japan’s most famous monster, taking place just down the street at Hibiya Step Square.

Back at the International Forum, the pre-screening festivities began with TIFF Festival Director Takeo Hisamatsu looking back at the nine days prior. Hisamatsu noted that TIFF’s mission is to create a festival that blends “art and entertainment,” and said, “In that respect, I’m very happy to close the festival with this film.”

Next on stage was this year’s TIFF Ambassador, actress Mayu Matsuoka, who received a bouquet of flowers from Hisamatsu. Looking back on the festival through a picture slideshow, Matsuoka remarked that some of her best memories included meeting anime director Masaaki Yuasa, actor-director Ralph Fiennes (The White Crow), and getting a handshake from none other than Godzilla.

Matsuoka, whose film Tremble All You Want won last year’s Audience Award in the Competition section, noted that the buzz created by that win “helped us get a lot of press and turned the movie into a long-run hit.” Matsuoka, also one of the recipients of last year’s inaugural Tokyo Gemstone Award for up-and-coming actors and actresses, congratulated this year’s Japanese recipients Mai Kiryu and Nijiro Murakami.

Finally, the ambassador wrapped up by saying, “I want to work hard to become a part of the film community and come back to TIFF every year.”

Commenting on the The Planet Eater, the final chapter in the animated Godzilla film trilogy, Miyano promised, “This is the film that will answer all the questions posed by the first two chapters.”

Voice actress Ueda added: “This is the kind of film that really makes you think, that you’ll want to talk to your friends about after you leave the theater.”

Sakurai, speaking about his experiences on the red carpet on the opening day of the festival, noted, “It made me realize that Godzilla is such a star… that there’s practically no one in the world who doesn’t know the series.” Sakurai added: “This film is on such a massive scale, I think it’ll open up new possibilities for Godzilla going forward.”

Speaking about the difficulties faced in completing the trilogy, director Shizuno noted it’s the longest project he’s ever been in charge of, and that “I was hired as someone who didn’t know that much about Godzilla, with no preconceptions—but along the way, I ended up learning a lot, so it was hard to remain objective.”

Director Seshita had the opposite problem: he was such a fan of Godzilla that the challenge, for him, was “whether we could actually do Godzilla as animation.’

Before the film rolled, the audience was in for not one, but two more special appearances. The first was by musician XAI, who launched into a spirited performance of the film’s theme song, “live and die.”

As if that weren’t enough, one more celebrity then appeared on stage—none other than the Big G himself. As he let out his distinctive roar, the voice actors on stage had fun recoiling in horror, then embracing, the famous monster. It was noted that November 3, 1954 was the debut of the first Godzilla film in Japan, making this Godzilla’s 65th birthday.

“Godzilla is really the pride of Japan,” said Miyano, playfully patting Godzilla’s head, while Hanazawa added, “It’s so nice to be able to see and touch him up and close.”

With that, Godzilla lumbered off stage with the cast and crew following behind, and Godzilla: The Planet Eater began.

The film, which hits Japanese theaters November 9, serves as the conclusion to the series that began last year, in which the remnants of humanity, forced to leave earth after it was overrun by Godzilla and other monsters, return from outer space in an attempt to reclaim the planet. After an encounter with Mechagodzilla and deadly nanomachines in the second film, Haruo, Metphies and the rest of the ragged band are at a crossroads, with infighting, coups d’etat and religious fanaticism threatening to destroy what’s left—if Godzilla doesn’t get them first.

And if that weren’t frightening enough, another monster Godzilla fans will know and love makes its appearance, wielding an awesome power that threatens not only Godzilla, but the entire planet. It’s up to Haruo to overcome his fear and anger and help to save the world—not just from this new monster, but from humanity itself.