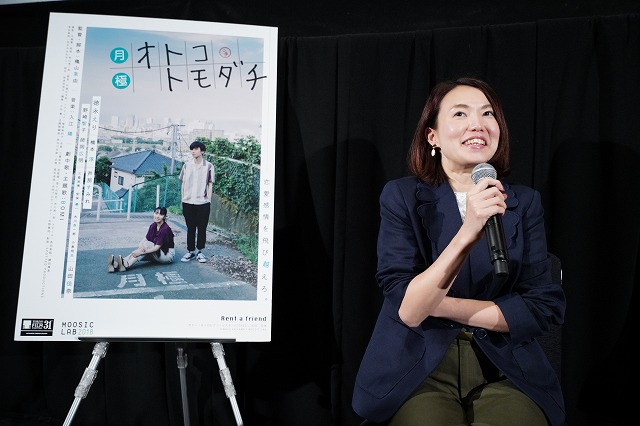 Testing the Boundaries in an Unusual Relationship

Following the screening of Rent a Friend on October 30, first-time feature director Mayu Akiyama appeared for a Q&A session. The film, competing for prizes in the 31st TIFF Japanese Cinema Splash section, focuses on an unusual relationship between a guy, two gals and music. It turns out this wasn’t by chance. As Akiyama explained, “I decided that I wanted to make a film for the Moosic Lab Film and Music festival, for which the criteria is to include music in the film. I read an article about how people are renting friends to expand their social networks. I think it’s a fundamental human desire to want to appear like you have a lot of friends. And I’d always wondered whether it was possible for males and females to remain friends in a relationship.”

And thus was born what Hollywood likes to call a “high concept” film.

The driving questions of Rent a Friend — are platonic relationships possible in adulthood? can you have sex and still stay friends? — are ones that confront adults in every society. Yet there are surely not many other places where you can actually rent a friend and be sure that the friend has a switch that flips to keep things completely unsexual. Japan is already famous for its rental families for weddings and rental mourners for funerals; but the film takes the concept one (or two) steps further.

Web magazine blogger and aspiring novelist Nasa Mochizuki (Eri Tokunaga of Kyoto Elegy, in her first lead role) meets Sota Yanase (Atsushi Hashimoto) one night in a bar, and later discovers that he rents himself out by the hour or on a monthly basis to keep lonely women company. Nasa smells a good story and decides to rent him herself. They begin spending time together, always on the clock, and it soon seems that a real friendship has begun to bloom. Nasa is blogging about their “dates,” and the ongoing story has become a big hit for her company’s website.

When her editor insists that she needs to take it a step further and try to seduce her rental friend, things start getting complicated. To make matters even more impossible, her roommate Tamaki (Sumire Ashina) a talented singer-composer, meets Kota and starts making beautiful music with him.

Akiyama told the audience that she wrote the script after conducting research. “I rented a friend and interviewed him, just like Nasa does in the film,” she said. (Yes, it’s possible to rent one of those in Japan, too.) “I chose someone in his 30s and met him, paid him and talked with him. It was easy to talk to him, because he was accepting everything I said. It may be an illusion, but I felt totally comfortable with him. I can imagine people could get hooked on that. It wasn’t a true friendship, but I started thinking that you can discover your real inner desires by going through a fake relationship [and openly sharing your feelings].”

She was asked how she found the actor for the rental friend role. “I met Atsushi Hashimoto when we first started casting. He’s very nice, very smart, very gentle. But you can’t figure out exactly what he’s thinking, which I think is really attractive. He’s not streetwise, which I also thought was perfect for Yanase.”

Akiyama is a company employee and was asked how she found the time and money to direct the film when she’s working full time. “This is a totally independent film, so I used my savings to make it,” she replied. “My time was very limited, and the schedule was really limited. I had a deadline to submit the film to the Moosic Lab festival. I started preproduction in January and we had to finish in June. I like to spend as much time on things as possible, so it was great to have a deadline so that I wouldn’t keep working on it forever. I took a week off of work and used both weekends, so we had about 10 days.”

A man in the audience, who didn’t say whether he was a colleague, a friend or something else, told her, “I’ve known you for 10 years and I never had a clue you were directing films.” Akiyama smiled and said, “When I made my last short, it was in a film festival, so I told my company officially that I’m directing films. My coworkers are really curious about it, so they supported me, and I’m really grateful. I couldn’t have done it without them.”

The emcee then asked how many people in the audience think males and females can be friends, and an overwhelming majority raised their hands. The director, however, isn’t convinced. “My opinion is that it can only happen if, when you get close to a guy and wonder what it might be like to be lovers, you just let that moment pass. If you can jump over the attraction, and control your uncontrollable feelings, I think it can exist.”

Rent a Friend will be screened during the Moosic Lab Film and Music festival in Tokyo, which starts November 14.