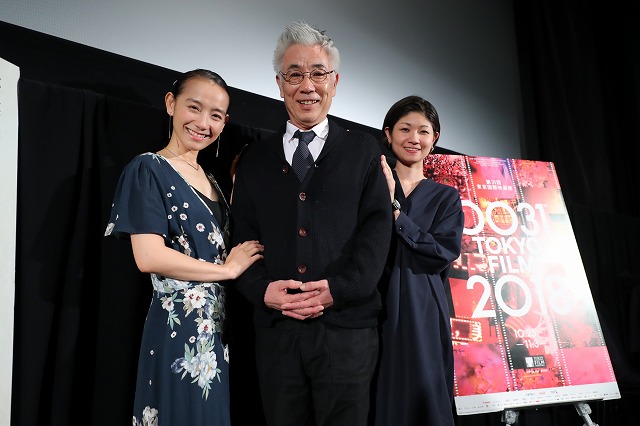 A Forgotten Artist Gets His Due

“This is only a small portion of the entire cast,” cracked actor Issey Ogata, as eleven guests crammed into the front of the theater for a brief appearance before the screening of The Manga Master on October 30. The film is playing in the Japanese Cinema Splash section at the 31st TIFF.

Directing only her second feature, Moe Oki’s beautifully shot Cinemascope work focuses on the life and times of a forgotten artist, Rakuten Kitazawa (1876-1955), considered to be the father of modern manga. Ogata (a 2016 LAFCA nominee for Silence) takes on the larger-than-life role of Rakuten, but he told the audience, “Young Rakuten is played by [a different actor]. I play Rakuten in the latter part of his life, which was rather sad and uneventful. This may seem like a small film, but with your imagination, it will grow huge.”

The Manga Master opens in 1943, when the older Rakuten (Ogata) has been made honorary president of the Japan Manga Service Organization. Like America’s USO during WWII, the group is expected to join the frontlines of the government’s ideological war by “serving the nation and inspiring the public” with patriotic comics. At an izakaya, Rakuten meets with younger mangaka, who argue with him that his stance against supporting the military is old-fashioned. They’ve all joined the effort, and they see nothing wrong with it whatsoever.

Rakuten is shortly thereafter summoned to the Office of Censorship and subjected to an interrogation of sorts about the meaning of manga, since “our staff is short-handed, and it’s easy to miss the truth in drawings because words are so much more straightforward.” The bureaucrat also says that, due to the paper shortage, the office is planning to reduce the number of manga allowed to be published — an easy way of eliminating anything seen as critical of the government.

As Rakuten (who understands immediately that he’s being forced into a cat-and-mouse game) attempts to explain what satire is all about, he recalls his early days at the turn of the century, drawing caricatures for the English-language magazine Box of Curios, before being summoned by the great Yukichi Fukuzawa, founder of the Jiji Shimpo daily newspaper (as well as founder of Keio University). In a humorous scene, Fukuzawa treats the young artist to his very first curry and coffee, both considered Western luxuries at the time, and hires him to create editorial comics, using satire to expose the truth, so as to “gain sympathy through high-quality critiques [of the status quo] that can change society.”

Five years later, Rakuten starts publishing the first full-cover comic magazine in Japanese history, Tokyo Puck, named after the famed American magazine, which is translated into English and Chinese and widely sold. By then, he has become a wealthy and popular man about town, and attracted young artists who begin to follow in his footsteps, some of them as apprentices. His devoted wife Ino (played by TV personality and artist Tomoe Shinohara) calls his colored drawings “cute and nice,” which grates on him, but his fight to continue elevating manga to a higher level continues well into his later years.

At the Q&A session following the screening, Ogata himself asked the initial question to the director: “Why did you make this film?” Oki responded, “Nobody remembers Rakuten anymore; he’s totally forgotten, which I thought was really interesting. I’d always wanted to make a film about [haiku poet] Hosai Ozaki. [In the course of doing research] I learned about Rakuten through his foundation in Saitama, and they asked me to make the film.”

Ogata admitted, “I didn’t know anything about Rakuten, either. I was completely attracted to that aspect of the role. And I just remembered that I played Hosai Ozaki [which caused the director to laugh in disbelief] on a TV drama. He wrote wonderful haiku.”

Asked why she had cast Ogata in the role, Oki answered, “Because he looks like Rakuten. I’ve always been a great fan of his, and Rakuten’s style of humor could only be portrayed by Issey-san.”

Another question concerned the casting of Shinohara, who plays Rakuten’s wife across the film’s span of 40 years. Oki was asked why she didn’t use a younger woman for the early years, as she had with Rakuten. “I couldn’t think of anyone else,” she admitted. “I didn’t have this image that Ms. Shinohara was a good actress, since I only knew her as the cutesy kyapi kyapi girl on variety shows. But I wanted to see a new dimension of her performance, and I’m very pleased with it.”

Shinohara noted that she did a stage play with Ogata in 2008 and, “I’ve always wanted to be in a movie with him. As a woman, I think it’s great to support a genius, to be by his side throughout his life. I really go for genius types. So being right beside a genius on screen, and working with a genius actor, made me very happy.”

A foreign scholar of Ippei Okamoto, who inspired the great Osamu Tezuka, was in the audience. Noting that she’d never heard of a rivalry between Okamoto and Rakuten — which is made much of in the film — asked how the scriptwriter did his research. Oki responded, “The characters are based on fact, but there are fictional scenes, such as the scene with the censor office man. No, Rakuten wasn’t really a rival with Okamoto. But I wanted people who’d never heard of him to get interested in him, so we had to take some artistic liberties.”

Ogata concluded the session by praising the young director, saying, “I felt like Ms. Oki was like one of those young men in the film, apprenticing under the master together, with no money but big dreams.”