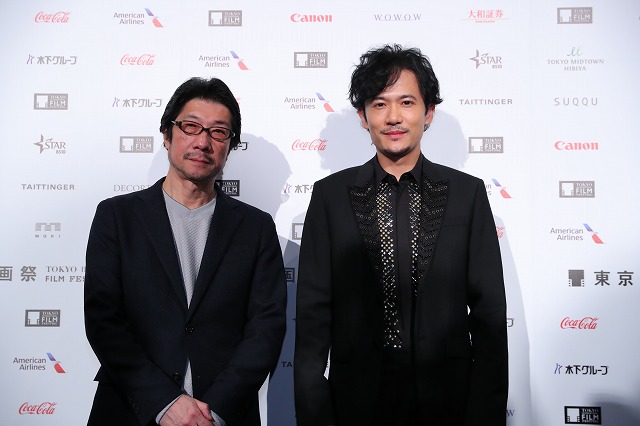 Viewing the World Through a Small Japanese Town

Director Junji Sakamoto and lead actor Goro Inagaki fielded questions from the press on October 30 following the world premiere of their character drama, Another World, one of the two Japanese films in the 31st TIFF Competition section.

Koh (Inagaki) is a middle-aged producer of high-grade sumiyaki restaurant charcoal. He doesn’t much care for his work, which he inherited from his father, nor the unappreciated wife and bullied son that it supports. He prefers to go drinking with his longtime friend, the jovial Mitsuhiko (Kiyohiko Shibukawa) but their lives are interrupted when Eisuke (Hiroki Hasegawa), another childhood chum, returns from his stint abroad in the Self Defense Force. Koh and Mitsuhiko take it upon themselves to reintegrate their friend into their small society, though Eisuke’s painful baggage makes this anything but a smooth process. The more time Eisuke spends back home, however, the more he helps Koh connect with the family he’s neglected.

The film marks Sakamoto’s return to a Japan-based tale after last year’s Ernesto, which he shot partially abroad. “I’m not from Mie Prefecture, but I wanted to feel like I was coming home with this film,” he said. “But I also wanted to include the perspective of someone [Eisuke] returning home to his small town with this new perspective of having seen the world.”

The title of the film was actually taken from a collection of the work of Kiyoshi Koishi, a prominent military photographer of the Second Sino-Japanese War. Normally, war photographers take photos of soldiers fighting valiantly, but Koishi featured many shots of children, animals and the everyday life of the local Chinese. “We often think of the word ‘globalism’ when referring to thinking about the world,” Sakamoto explained, “but looking at these photographs made me realize that this everyday life is just as much a ‘world’ for those who aren’t recognized from a global perspective. It made me want to make a film about this smaller world.”

Like Koh, Mitsuhiko, who’s a used car dealer, inherits his business from his father, and their stories were partly inspired by Sakamoto’s experience with his father and his friends and their fathers. “I’m the child of a small-town merchant and was responsible for closing up the shop every day,” he explained. “I could always hear people on our shopping street talking about whether or not they would be succeeding their fathers’ business.”

Inagaki, who is best known for his decades as a former member of the recently desbanded boy band, SMAP, plays a different role than his typically image-friendly characters. “I’m probably the only person to think of casting Goro Inagaki as a charcoal maker,” joked Sakamoto.

Asked if he was trying to change Inagaki’s clean image, Sakamoto explained that he saw the star as a reserved and honest person when he first met him. “I got an image in my head of someone alone in the mountains, engaged in his work,” he explained “I didn’t want to change Inagaki’s image; I saw him in this image and I thought he would get into the role. Of course, Koh and Inagaki are very different people, and Inagaki is not a thoughtless person like Koh.”

Inagaki was happy to take on the challenge of playing an unlikable character. “I tend to play cool people, but I personally don’t think of myself as a cool guy,” he said. “I’m pretty awkward, so it’s not like I had to be directed to be less cool.”

Sakamoto and Inagaki worked hard to get the mannerisms of Koh’s masculine character correct. “We had to shoot 10 or 20 takes on the first day of shooting,” said Inagaki. “My gestures are normally a little too graceful, so we had to shoot a lot of takes to get the gestures more awkward or manly. It’s very difficult to change the style of gestures, as we make them unconsciously, so I was given many detailed directions, down to the peeling of a tangerine.”

Inagaki said he was happy to see a “different me” on screen. The film is the first he’s appeared in following the dissolution of SMAP and his departure from the Johnny’s & Associates talent agency. “I really don’t know what kind of person I am or what kind of characters are perfect for me,” he said. “Maybe this is a good thing, as I can challenge many different roles if I don’t know which one’s a good role for me or I’m not being typecast.”

Asked if he had any similar personal friendships on which to draw inspiration for the film’s strong friendship, Inagaki said he doesn’t have many childhood friends, but has a similar type of close relationship with his former SMAP members. “Our group recently disbanded,” he said “but Shingo Katori, Tsuyoshi Kusanagi and I have formed a new group and are trying hard to sail into the new world. They aren’t exactly the same as Mitsuhiko and Eisuke because we’re also business partners, but we still have this strong male bond. In this way, I found I could relate to the characters in the film.”