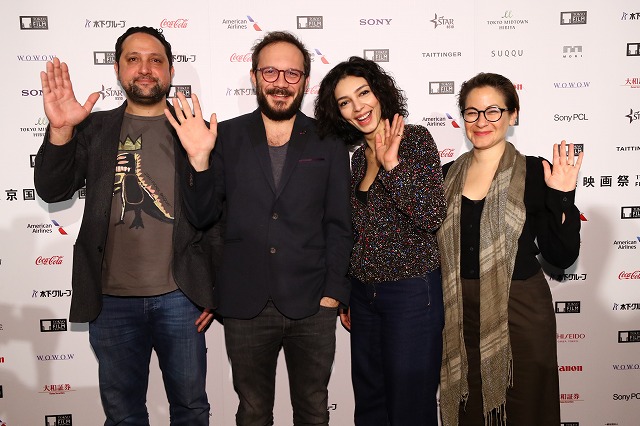 In the film, Celiloglu plays Tahsin, a put-upon architect working in Istanbul, frustrated that the skyscrapers he is helping to build are robbing him of peace of mind. One day, he rendezvouses with Siren (Celik), an old female friend who left an advertising job to live on the southern coast of Turkey and farm organic produce. Lured by her call to start a new life, Tahsin abruptly quits his job and attempts to head to her village with the small amount of cash in his pocket. But the voyage to paradise is not so easy, as Tahsin is amusingly blocked at every turn from leaving the congested city. While attempting to escape his urban prison, Tahsin finds himself lost within Istanbul’s gentrifying neighborhoods and on the run from its angry inhabitants.

Showing his film for the first time in a similar concrete jungle (Tokyo), Matin remarked: “There is a common element to all big cities around the world, and we wanted to explore that, but we also wanted to make a film that shows our daily life in the big city of Istanbul. Escaping the city is a common thing to talk about today, and we wanted to see if it would really work.”

Siren’s Call was well into pre-production in 2016 when the failed coup attempt in Turkey postponed shooting for a year. “But when we finally ended up shooting last year, we had a very good energy on set and had a lot of love for each other,” said Yildirim.

Matin and his crew strived to capture the raw character of the city’s neighborhoods on a miniscule budget, largely working in a guerilla style of shooting on the streets when no one was watching. “It was a bit crazy,” recalled Matin, “working with these small cameras going in and out of anywhere we could without being caught.”

The cameras follow Tahsin through traffic and alleyways, cafés and barbershops. One such scene involves Tahsin attempting to head to the airport by hopping into and out of crowded buses. “We didn’t hire extras on the bus,” explained Matin. “We had crew members create a buffer around the cast so they wouldn’t look directly into the camera, but the rest of the crowd were real commuters.”

The film’s sound design also perfectly captures the din of the modern metropolis. Every scene is filled with the sounds of running car engines, blaring horns, ringing phones and the seemingly never-ending noise of urban construction, a point that the film is most critical of in its many wide-angle shots of metal behemoths that envelope the lost Tahsin. “We do not need all these buildings; they are being created to boost the economy,” said Matin. “The construction is creating a bubble and it has come crashing down. There are reports that there are 1.5 million empty apartments. What’s more, it’s being done without any plan for the city or consideration for the people who live there, but just to throw money around.”

Celiloglu’s Tahsin is a mix of the pathetic and ridiculous, running around the city in a suit asking street vendors and hoodlums for taxi fare to the tune of Mozart’s Turkish March (or, as Matin explains, “The original title, Rondo Alla Turca, which means to ‘go in circles, Turkish-style,’ which is exactly what Tahsin is doing throughout the film”). But Tahsin is also recognizable, as he could stand in for many of us harried city slickers. “This role was very similar to my experience living in the city, and the spirit of the character was not difficult for me to catch,” explained Celiloglu. “What was difficult was to make the character sympathetic despite his being a loser. The audience shouldn’t completely reject the character of Tahsin, and this was the challenge in portraying him.”

Tahsin eventually makes his way to country, but finds that life is less idyllic than imagined. Celik’s Siren is also not the advocate of simple living that she initially appears to be. “A lot of people want to leave the city, and I used to encounter this in others and feel this myself all the time,” said Celik. “What is different about Siren is she accomplishes this, she actually leaves. But even if we manage to leave, we cannot leave ourselves, and the new place we build is based on our old mentality and beliefs. Siren, to me, is the most down-to-earth character in the film.”

Celiloglu, Celik, and Matin all agreed that they couldn’t part from the city just yet, but all had issues with urban living. “With a city like Istanbul, I often don’t feel like even leaving the house, because it is so chaotic,” said Matin.