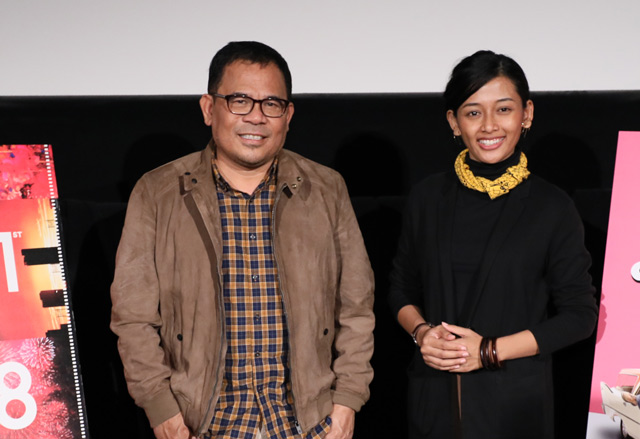 Rumi and Yulia are childhood friends who live in Indonesia. Yulia’s father who works as a technician for radio company suffering a downturn in demands disappears from home. Rumi’s father’s company is on the verge of financial difficulty due to the competition from U.S. import soft drink maker. His bad temper worsens and he soon gets a habit of beating his wife. The film depicts the young couple’s unexpected separation and rencounter with political and economic circumstances in the background.

“I am truly honored to know that the 13 of my films were screened here.” “My personal experience is depicted in this film.” “The scene of children sitting on the bridge in the opening, for example, is based on a real-life experience.

Hertami who played the role of a student in Nugroho’s Soegija, 6 years ago at the 25th TokyoIFF, showed impassioned performance as mother of Yulia this time.
“The role was challenging in view of fact that I was not a mother yet. At the time, women married at young age and had a friend like relationship with their daughters who were close in age. Playing such a role was one of the difficulties,” she said looking back.

During recent years, Garin Nugroho has been putting an emphasis on nurturing of Indonesian women director. Looking back upon the last year’s 18th Tokyo Filmex, he mentioned the Best Picture Winner, Mouly Surya,’s “Marlina the Murderer in Four Acts” and in addition Kamila Andini, “The Seen and Unseen”, and revealed that “Two women directors who are important for Indonesian Film Industry were born. I did the story of “Marlina the Murderer in Four Acts” and believed that this couldn’t be depicted from the perspective of a man but should be depicted by the woman’s perspective and made a request to Mouly Surya.”

Hertami who is currently majoring in the cinema studies at the graduate school and learning from Garin Nugroho, says, “The Opening film of this year’s film festival, A Star is Born is also directed by the actor, Bradley Cooper. Studying film production will also have an impact on the actress as well.“ She said hinting her aspiration for the film production.