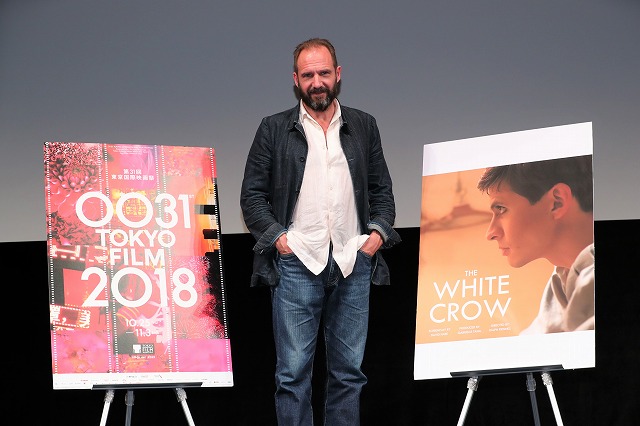 The 31st Tokyo International Film Festival Competition section film, White Crow, made its Asian Premiere at the Tokyo Roppongi EX Theater. The Q&A session has been carried out in the presence of the Director, Producer and Actor Ralph Fiennes.

“Class of its own” is the translation of the original title for the biography of Rudolf Nureyev which is about a successfully renowned Soviet dancer. The book depicts the poverty-stricken childhood to the blossoming of talent at the years in Leningrad School of Ballet and to his sojourn in Paris during the early 1960s up to the thrilling exile at the Le Bourget airport. Fiennes who has detailed knowledge about the Russian culture read Nureyev’s biography 20 years ago and held the concept of film adaptation for years.

Receiving massive applause from the audiences in fully packed theater, Fiennes mentioned, “This isn’t about the famous years of Nureyev but is a story about Nureyev’s youth. I was deeply impressed by his dynamic mind that aspired for self-actualization. Nureyev was also well known for provoking people at times, but his intentions were always to become a perfect dancer. One of the film’s setting is during the Cold War period. Even under such environment, he desired of becoming free and fulfilled his desire. I think it was a courageous act as a human being.”

Oleg Ivenko was selected for the leading role of Nureyev, who was a principal of Tartar State Academic Theater of Opera and Ballet, although he had no acting experience. “We’ve held a grand auditions throughout Russia searching for dancer who could act. As it turned out, there were 4 to 5 casting choices. I thought Oleg was good for the part from the start. When you are doing an audition for biographical film, it is important that the cast has resemblance to the protagonist. Although Oleg was a Ukrainian and not a Tartar like Nureyev; I thought he looked considerably like Nureyev. Oleg had instinctive on-screen talent.
His performance as an actor was wonderful,” Fiennes praised him.

White Crow being his 3rd film as a director, Fiennes mentioned, “Much needs to be learned about directing, but next time, I will like to concentrate on it. Working concurrently as a performer was just too much, but I appeared in the film for the financial reason. I had a privilege of working with many people with skills. I, myself is credited as one of the producers, but that was possible because of Gabrielle Tana, an amazing woman. Fiennes played the role of Nureyev’s teacher and spoke fluent Russian. “I spoke a little but was not fluent in Russian, I had assistance from the translator and practiced diligently. We also made corrections at the post-production afterwards.”

When the audience asked, “Which country of production gave a biggest impression for you?” Fiennes replied, “As I have an affection for Russian Culture, Saint Petersburg was most impressive for me. The architecture and the art museum were wonderful. There was an emotional meaning to be able to do good deal of cinematographing in Saint Petersburg. We shot footage in Serbia as well because the country was friendly to filmmaking. The tension arose the most in the scene at the road where rustic wooden door of the School of Ballet was opened. Another important scene was where Nureyev looks up at the Rembrandt’s The Return of the Prodigal Son. The State Hermitage Museum allowed us to shoot the footage. The museum had a policy not to allow the feature cinematography in the museum, but we were able to convince the curator of the museum. We were also able to shoot footage looking up at the Géricault’s painting at Louvre Museum during the closing time. There was Mona Lisa nearby and it was memorable to be able to have Mona Lisa entirely to ourselves.” he said happily.

There are numerous films slated as an actor but as for the concept of the next film Fiennes
said, “I will like to create the film if I can find the idea or a story that appeals me. But I don’t have any yet.”