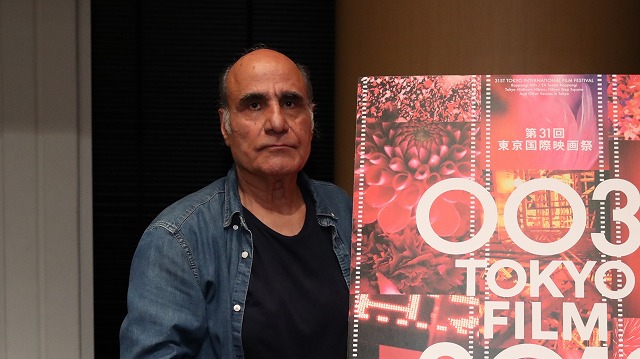 There are perhaps no words in the English language that quite capture the spirit of acclaimed Iranian filmmaker Amir Naderi. Ebullient, effusive, energetic — all are part of his endless charm (and echo the three E’s of the Tokyo International Film Festival’s vision), but he exceeds adjectives to such an extent that he deserves his very own: Naderiesque, perhaps.

At a TIFF Master Class on October 29, his unrestrained passion for cinema was on full display. His three-day course opened with a publicly-audited session combining a lecture and an acting workshop. It drew a large audience of onlookers, including familiar faces from Japan’s film world, many of whom are already fans.

One of the most influential figures of Iranian cinema, Naderi shot to international fame with Waiting (1974), which won the Jury Prize at Cannes, The Runner (1985), and Water, Wind, Dust (1989). After expatriating to New York in the early 90s, he started producing films in the US, including Manhattan by Numbers (1993), Vegas: Based on a True Story (2008) and Magic Lantern, which premiered last month at the Venice International Film Festival. His 2011 film Cut was shot in Japan in Japanese and stars Hidetoshi Nishijima and Takako Tokiwa. A fixture on the international festival circuit, Naderi has taught at leading universities and lectured literally around the world.

The TIFF course was organized with the support of Eric Nyari, the New York-based producer who worked with Naderi on both Cut and Monte (2016), and Mizue Kunizane, CEO of Dongyu, Inc., an international sales agent, distributor and talent management agency. She had put out the call for aspiring actors to participate in the workshop.

Naderi plunged right in. “I don’t know your language, but I know your cinema,” he said. “All my life, I’ve been obsessed with Japanese cinema, especially from the Golden Age. I even made an homage to Japanese cinema called Cut, with Mr. Nishijima acting and Eric producing.”

He spoke with great admiration for Shohei Imamura and his three collaborations with Ken Ogata, particularly his Cannes -winning Ballad of Narayama. “In the final scene, [Ogata’s character] was carrying his mother, and he didn’t just carry her. He would stop now and again, and look at her to see whether she was okay. That’s the mark of a great actor.

“Over the past 10 years, I’ve helped bring film restorations from Japan to festivals around the world. I’ve been acting as an ambassador of Japanese cinema around the world, without knowing the language. At these festivals, long lines of people form in the early mornings to watch these classics. They admire and appreciate Japanese films of the Golden Age.

“I always wonder how much young actors and directors and writers in Japan know about these films. I think all of them should know about the past. Without the past, we’re nobody. Anyone who wants to be involved in cinema should be looking at who did it before, and drawing inspiration from them. If you want to be a good actor, you must watch who did it before, how they did it, how they made you feel something in your heart.”

He then proceeded to begin the workshop with a group of young, unknown talents, joined by veteran TV actor Katsunori Takahashi and by Ryutaro Ninomiya, the actor-director of festival favorite Sweating the Small Stuff (2017).

“I know some of these kids,” said Naderi. “Some of them are actors, some are directors, some have experience and some don’t. I’ve been teaching workshops like this for a long time all around the world, probably more than 100 of them.”

Encouraging them to “bring what they have in their hearts,” but warning them that they must know themselves inside and out, above all, he first asked each to stand and introduce themselves, and vigorously interjected questions like “Why do you want to be famous?” and “Why are you here?” and “What did you learn at my workshop last year?” and “What foreign actor’s performance have you admired?” and “What character would you play if you could choose any character?”

“The first thing in acting is to listen,” he emphasized. “Your eye language is very important, not just the dialogue. The best actors listen and pause between the dialogue. Even if the script isn’t good and your part isn’t good, you should be showing the audience something they can be notice. Acting is making things believable.

Rapping the table for emphasis, he exhorted, “Forget the brain in acting. Use your heart. The brain is logic, it has nothing to do with art. You must find yourself. It’s important for an actor to know what he has inside, and really know himself.”

When one young woman mentioned that she wanted to work “either here or overseas,” he advised, “If you want an international career, you must first know about your own country first, your culture, your people, your history, all of it. Once you know it, you can go. Then you can connect with people everywhere.” He mentioned that he’d made nine films in Iran and become very well known before he decided he wanted to leave and pursue opportunities elsewhere. “It was very difficult,” he recalled. “All these years, 30 years, I’ve never gone back. You never know what you’re going to find.”

As well as dispensing advice and encouragement, Naderi also shared a wealth of anecdotes, like these:

“When we were trying to raise money to make the film 99 Homes [which Naderi cowrote with director Ramin Bahrani in 2015], we were told, ‘You should cast a famous actor and then investors will invest.’ We asked them who they thought was good, and they said Leo DiCaprio, Johnny Depp, who are way too expensive. We met Andrew Garfield, who was raised quite wealthy. But he’s supposed to be very poor, the character has no money and the government reposesses his home.

“We brought him to the Florida set which was a cheap, dirty hotel with bad food. We put some cameras in the room without him knowing. He did a really great job, even though Andrew never had the experience of police coming to his home and taking away his life. He tried to make himself into nobody, just empty. During rehearsals with the great actor Michael Shannon [his co-star], we talked about how we could bring Andrew down as low as possible, and one thing I asked him to do was to interrupt every time Andrew talks. ”

“I’ve seen Robert DeNiro acting on set several times, and on Raging Bull, he always finished a take and left the set and went into a room by himself. Some years later, when he was doing Analyze This, he was laughing and relaxed on set. When I asked him how he had changed so much, he said, ‘This role is funny, and I’m just acting.’”

“I was on the jury at the Pingyao Film festival, and I asked Jia Zhangke why he had only 12 films in the competition. He said, ‘Out of 1,000 films, only a few were original. For these three days, I wanted to find what is original.’ But I believe that every actor, director and writer can be original. Originality and listening and feeling and knowing about yourself [are the keys to a fulfilling career].”

Taking questions from the audience at the end of the session, Naderi was asked whether he thought it was possible to begin acting late in life. After teasing the questioner that his obsession to act was likely to grow and consume him, he responded, “Why not? In this country there aren’t so many good actors of your age range (late 40s), so start tomorrow morning.”

“We don’t need wonderful acting,” he concluded, his voice rising. “We need magic!” Over the next two days of the workshop, closed to outside observers, one can imagine just how many lives will be transformed by Amir Naderi’s infectious enthusiasm.