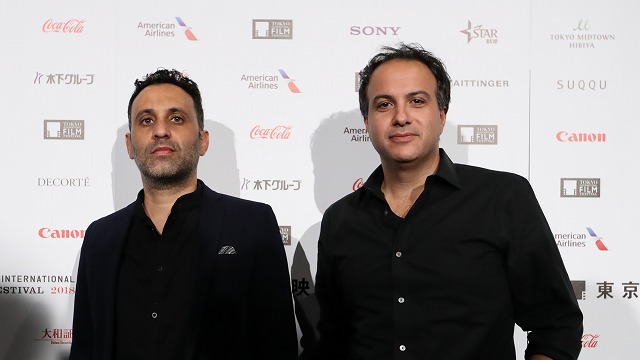 “Comedy is a good way to deal with tragedy,” said director Sameh Zoabi following, the October 29 press screening of his film, Tel Aviv on Fire, which is playing in the 31st TIFF Competition section.

The comedy, which had its Asian premiere at the festival, revolves around Salam (Kais Nashif), a low-ranking assistant on a fictional Palestinian soap opera, Tel Aviv on Fire, an over-the-top spy drama that takes place during the Arab-Israeli War (aka Six-Day War) of 1967. After suddenly being promoted to writer, Salam — who’s never written anything in his life, much less a screenplay — strikes up an unlikely friendship with Assi, the Israeli commander of the checkpoint Salam must cross through to get to work every day.

The unlikely pair, a Palestinian and an Israeli, work together to cook up potboiler scripts that end up enthralling viewers in both countries. But tensions flare between the two when Assi proposes (or demands, to be more accurate) a finale that goes against everything Salam believes as a Palestinian. Meanwhile, tensions on the set and between Salam and his would-be girlfriend keep the dramatic —and comedic — sparks flying.

“The idea for the movie was very personal,” commented Zoabi at a press conference following the screening. “I previously made another movie, Man Without a Cell Phone, which is another comedy about the conflict between Israel and Palestine. People had strong opinions about the film… and they had strong expectations about what I would do politically in my next film.”

Zoabi, himself a Palestinian living in Israel, continued, “Tel Aviv on Fire is a movie about me. Salam, like me, is an artist looking for his voice in a complex reality.”

Also in attendance following the screening was actor Yaniv Biton, who plays Israeli checkpoint commander — and budding screenwriter — Assi. Speaking about the process of landing the role, Biton commented: “I was surprised to see a comedy about the conflict… this is probably the first real comedy about it. I liked it politically, but I also liked the characters, the story, the motives.”

Biton continued: “I do a lot of auditions, and I don’t necessarily want every part, but this one I felt I strongly wanted.”

One key role in Tel Aviv on Fire is played not by a person, but by a food: hummus. When Salam asks Assi for help on his scripts, offering him money, Assi refuses. “I don’t want money,” he tells him. “I want good hummus from Jerusalem.”

The relationship between Palestinians, Israelis and hummus is a bit of a running joke in the region, explained director Zoabi, stating that Israeli foodies go wild over hummus, while for Palestinians, it’s a family staple, not something to actively seek out.

“But hummus can be very political,” he added. In the film, it functions as a metaphor: “We Palestinians were in the region before ’48, and hummus was there too, but now Israelis have adapted it into their culture… the fight over hummus is a symbol for the fight over land.”

Using jokes about soap operas, hummus and more, Zoabi hopes his film gets laughs and helps “Israelis, Palestinians and people around the world to get a sense of the current situation from a different perspective.”

As for the “around the world” part, TIFF seems to have been an important milestone for gauging how far-flung international audiences will react to the film. Biton shared a recollection from the first public screening on October 26: “Israel and Palestine are so far from here, so I was surprised the jokes went over so well. I talked to Zoabi right afterward and said, ‘It works! It works! People laugh! It works!’”