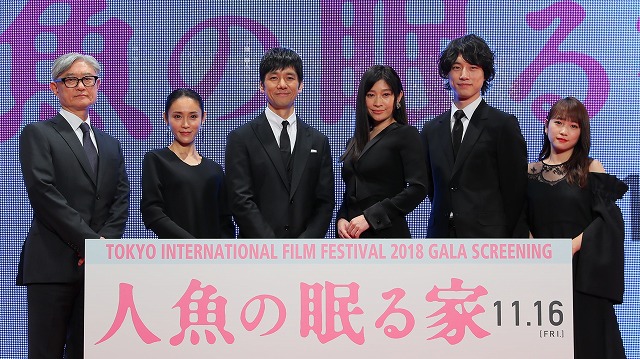 Making a stage appearance before the 31st TIFF Gala Screening of his new film on October 29, versatile director Yukihiko Tsutsumi (20th Century Boys, Trick) acknowledged that he didn’t make it alone. “I’m so happy to see so many of you here for the world premiere,” he said. “We spent a long time making the film and I feel confident that you’ll enjoy it. I want to thank the cast for their exceptional performances, and the crew that supported us, especially Mr. Aragaki of Shochiku.”

Tsutumi and the main cast of the film had just come from a thronged greeting event in the Roppongi Hills Arena, where fans took selfies and excitedly received autographs. Some of them had also come to the theater, and were yelling “Ken-chan!” for one of the hot young stars of the film, Kentaro Sakaguchi.

Based on the 2015 bestseller of the same name by Keigo Higashino, marking the 30th anniversary of his career, The House Where the Mermaid Sleeps begins as a family drama and transforms into an increasingly disturbing mystery film, revolving around a fatally injured child and a mother whose love leads to madness.

Kaoruko Harima (Ryoko Shinohara) has two children, whom she dotes on. She’s separated from her husband Kazumasa (Hidetoshi Nishijima), the owner of a company producing high-tech robotic support systems for the handicapped. They’re planning to get a divorce once their daughter Mizuho (Kurumi Inagaki) enters elementary school. During a meeting related to the entrance exam, they learn that Mizuho has fallen into a coma after a near-drowning accident in a pool. Rushing to the hospital, they are told she is brain dead with no prospect of recovery. They are given the choice of donating Mizuho’s organs to others in need, or waiting until her heart stops beating.

After an agonizing process, the couple decides on the first option. But as the family is gathered to say goodbye, Kaoruko sees her daughter’s hand twitch and is unable to accept the reality of her death. She presses Kazumasa to help with Mizuho’s “recovery,” and he relents, assigning a young scientist in his company, Yuya Hoshino (Kentaro Sakaguchi), to pursue advances in “artificial neural connection” technology. They install Mizuho on a life-support system based on muscular stimulation, and it does not just maintain the little girl’s beautiful suspended state, it gradually begins improving it. Soon, Kaoruko and Yuya have embarked on a path that deeply troubles all those around them.

Ryoko Shinohara told the audience, “It’s a very moving film, and I’m really confident that you will enjoy it and you cry, as I did. Even when I was preparing for scenes, I would open the script and start reading, and immediately start crying, getting red, puffy eyes every time.”

Talking about the excellent young actress who plays her daughter in the film, Shinohara said, “Kurumi is really a sweet girl. In the film she had to close her eyes the whole time, but she would start moving around immediately whenever the director yelled cut. She loved Mr. Nishijima so much, and if this were real life, this is how a family would be.”

Nishijima concurred. “She had to stay very quiet, and Kurumi is like a genius kid, a natural. We didn’t have to explain anything to her. From the first moment, we were mesmerized by her abilities. The actor playing my son, also, was so into the character that, in the climactic scene, he couldn’t stop crying, even after the director yelled cut, so Ms. Shinohara had to hug him and comfort him.”

Tsustumi explained, “I really wanted to build the emotions in a natural way, so we shot chronologically, and we actually shot the climax at the end. It’s a very luxurious way to shoot a film, and I’m very grateful to the producers.”

Sakaguchi said, “My character is very pure, and he gets very much involved with Mizuho. He’s so involved that people tell him he’s got to stop. I wanted to show his sense of justice, but he gradually fails to see things around him.”

Rina Kawaei, who plays Yuya’s neglected girlfriend, mentioned that she had brought her mother along to the premiere, since her agent told her that she should always do so. “It was such an honor to be among this wonderful cast. I cried during shooting. My character is watching the Harima family as Yuya gets more and more involved. The director told me to always have a smile of kindness, like a goddess. I wouldn’t ever fall for a guy who gets that involved in his work.”

Sayaka Yamaguchi, who plays Kaoruko’s sister said, “Being on set was very painful at times, since there was so much emotion in my ‘sister.’ The director told me to provide a contrast to Kaoruko, who’s in very deep sorrow. I tried to bring her back to normal life. I couldn’t be a sun to her, but at least I could be a lightbulb, who tries to cheer her up.”

Veteran dancer-actor Min Tanaka, who plays Kazumasa’s father, the founder of the company he now runs, was also in attendance. “After I finished filming, there were so many emotions involved, and I had all these thoughts in my mind, all these questions without answers,” he said. “I think we should all be thinking about these questions.”

Shinohara noted that she and Nishijima had made three films together, “but this was the first time we’ve acted together after we both got married and had families. We talked about that a lot in preparing.”

Nishijima praised his costar. “Since this is a film about families and children,” he said, “I think there’s much more depth and gravity in her performance because of her real-life experiences.

For her part, Shinohara said, “Mr. Nishijima has become much deeper and he’s become a big star. I was recently admiring this fabulous picture of him in Hibiya, and then I realized, I can see the real thing, so I should stop.”

Back on a more serious note, Tanaka said, “In my role, there is a dilemma over what I say to my son. Unlike younger folks, my time on this planet is limited. Aging is not just about time passing, it’s about accepting all the questions of our time.”

Tsutsumi wrapped up the session by telling the audience: “I’ve made many films, but I’m very confident about this one. I think there are many ways to interpret it, which is how I felt when I read the original novel. I hope you’ll enjoy it.”

Following the world premiere of the film at TIFF, The House Where the Mermaid Sleeps opens in Japanese theaters on November 16.