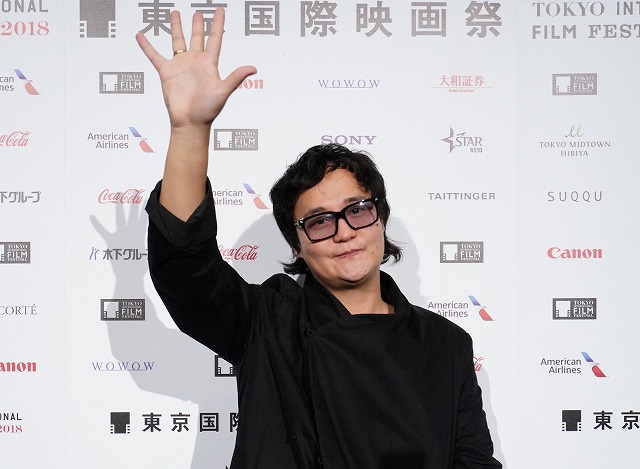 A family living in isolation has their world turned upside-down when they meet an outsider in director Emir Baigazin’s The River, making its Asian premiere in the 31st TIFF Competition section.

The film, which played to the press October 29, takes place in the desert in Kazakhstan, where a man and his wife have created a home for their children far away from the influence of civilization — in order, as the man says, “to keep them away from lies.”

Instead of spending their free time with video games or watching television, the couple’s five children, all boys, use their imaginations to create their own games, or go swimming in the film’s titular river.

It may sound idyllic, but it’s far from a utopian existence: the father forces the boys to work long hours each day on repetitive, seemingly meaningless tasks. Instead of handling things directly, he has given his oldest son Aslan (Zhalgas Klanov) the job of rearing and commanding his younger brothers. When Aslan fails at this task, the father whips the brothers while Aslan is forced to watch.

Life continues apace for the family until the sudden arrival of the father’s nephew, who enters the scene in jarring fashion, figuratively and literally, wearing a shiny silver jacket, riding an electric scooter and packing a video game-filled tablet, which quickly enchants the brothers.

What follows is the slow collapse of the family’s rigid order, as brothers and father alike are swayed by the temptation of television, money, and pornography — all to Aslan’s horror. When the cousin is seemingly whisked away by the river’s strong currents, Aslan uses the situation to pit his brothers against each other and reassert authority in the process.

The River, explained the director during a press conference following the screening, is the third film in a thematic trilogy that started with the director’s Harmony Lessons (2013) and continued with The Wounded Angel (2016). While the earlier films dealt with physical violence, including murder, The River is more about “spiritual violence,” explained Baigazin.

“I also wanted this one to have a slightly brighter tone,” continued the director. “I wanted to liberate the characters, set them free. The concept of ‘miracles’ was a big theme.”

The River’s themes are supported by some remarkable stylistic choices, including the film’s painterly, symmetrical shots and languid, deliberate pace. Both of those elements come directly from Baigazin: aside from being director, he also served as the film’s director of photography, editor and producer.

Asked how he managed to get great performances out of child actors while simultaneously creating such beautiful imagery, Baigazin responded: “I don’t know how other directors feel, but for me, the two are linked. When I’m directing actors I’m also thinking visually, so it comes instinctively.” He continued, “When I said I wanted to take all these roles, my team said, ‘that’s impossible.’ They had their doubts, so I put it upon myself to surprise them, to make them realize I could do it.”

Baigazin added that one of his key visual ideas came from Japan: inspired by the works of Yasujiro Ozu, he shot the entire film with a single lens. “Homes in Kazakhstan are quite small, though, so shooting with one lens was a challenge!” he admitted.

As for the actors, molding their performances began long before the camera rolled. Baigazin revealed that the five actors playing the brothers lived with each other for three months before filming began, learning how to work together as a family (and how to swim in strong rivers).

What’s next for Baigazin now that his thematic trilogy is complete? Though The River is a very artistic piece of work, the director noted that he is also interested in more commercial entertainment.

“I don’t like to divide between ‘auteurist’ and ‘commercial.’ I want to be as free as possible in all areas.”