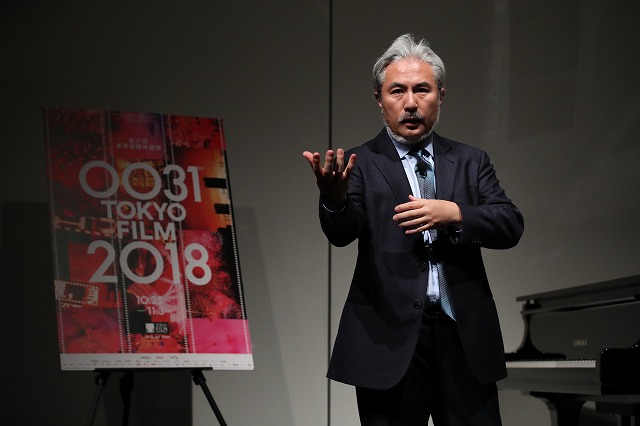 Music composer Taro Iwashiro, whose credits include scores for John Woo’s Red Cliff, Bong Joon-ho’s Memories of Murder, Lee Sang-il’s Unforgiven, and most recently, Yoshiyuki Kishi’s Wilderness, was suffering from a 40-degree (Celsius) fever October 28 at the 31st TIFF when he arrived for his master class. But he showed few signs of illness in a spirited presentation on his life as a music composer, interspersed with musical interludes. With audience encouragement, he even continued well beyond the allotted finish time.

The first half of the talk revolved around Iwashiro’s approach to making music for films. “Some composers say that the music came to them through an act of God,” he said, “but that almost never happens. I usually don’t start working until the deadline approaches and [wind up creating] around a song a day for a month.”

According to the composer, issues such as themes and timing for a musical score are important, but the most significant element is what sort of music emerges that is unique to the screenplay. “What role must the music play?” he said. “If I can’t see this, it’s very difficult to compose.”

Iwashiro talked about “the two climaxes” he always has in mind when composing: “The theme that comes at the climactic moment in the film, and the theme that plays when the credits roll. This is the second climax of the film, where I want the audience to relive the film again, and feel the emotion of the film through the music in their heads on the way home.”

The composer also discussed how his films are primarily made with the directors’ vision in mind: “If there is too much collaboration, the focus will be ambiguous. Listening to the director organize the themes of the movie is heathiest for my approach.”

Iwashiro gave the audience an example by playing a song he initially proposed for Isao Yukisada’s Spring Snow, and then showing a clip of the film with a different melody. “It’s very different, right? I loved the first song, but upon seeing the footage, we agreed it felt too much like a Korean drama. So we created a different song that was more befitting of the performances.” (The original song eventually found its perfect match in another film).

The trust between the director and composer was a running theme in Iwashiro’s talk, and he gave the audience other examples, from working on Junji Sakamoto’s Children of the Dark (“The stakeholders for the film were all in tears upon hearing it”) to Lee Sang-il’s Unforgiven (“Lee challenged me by asking for music that was karmic, not emotional”), to Bong Joon-ho (“It was a very precious experience as it was the first time I had ever produced a score without making a demo first. We created the music over three days in a Korean studio, where he would react to whatever I played on the piano”).

He gave special consideration to Yoshiyuki Kishi’s Wilderness, utilizing a Korean janggu to score the music for a scene where a Korean actor playing a Japanese delinquent is ambushed. “Like the shamisen has historically been made out of cat’s skin,” he explained, “you need to kill a dog to produce the skin for a janggu drum. Each animal, each life, has a different sound. Sound relates to life, and this is the idea I wanted to express to the director.”

As each director is different, Iwashiro explained there is no formula for how he composes his scores, but he always develops a relationship with the director to understand their working methods and ideas. This has occasionally resulted in conflicts when the financers and producers have very different ideas for the film’s score, as when Warner Bros. demanded more emotional music for Unforgiven, or when producers for John Woo’s Manhunt wanted a Hollywood action-style soundtrack while Woo wanted jazz. “In the end I must convey the director’s wishes,” he said, “But sometimes I’m tasked with satisfying opposing desires. With Red Cliff, I had to take a blue request and a red request and produce a purple score.”

Midway through the seminar, Iwashiro invited renowned composer Kenji Kawai on stage to talk shop. He related a funny story about how a game company gave him vague instructions (“They told me my score is like a ‘bing,’ but what they wanted was a ‘bam’”); while Kawai revealed that, despite his fame in scoring soundtracks for action sci-fi flicks like Ghost in the Shell or action blockbusters like Ip Man, his preference is for more comic music. “Fighting really isn’t my thing,” he confessed.

Iwashiro took to the piano for short live performances, encouraging the audience to imagine situations like “their first love” or “the life-or-death surgery of a best friend” and playing music that would fit the situation. The idea wasn’t necessarily to prove that he could read the audience’s mind, but rather to demonstrate that even his music is just one person’s interpretation of such an emotional experience. “The challenge is always in trying to make that music express an emotion that is universal to us all,” he said.

Towards the end of the talk, Iwashiro discussed the “borderless” nature of the film industry and how he tries to draw on the limitless resources of “earth culture” for his scores. He also discussed the limitations that the Japanese film industry currently faces: “Outside of anime, Japan’s content industry is only interested in the domestic market. Meanwhile, Korea’s market is too small, so that its industry is very outward looking, and I wish we had more of that.”

On the bright side, he said that young directors in Japan have been able to express themselves despite these domestic limitations. “I’m impressed that they can make such interesting films without the existence of music, even though it makes me a little sad as a composer,” he said. “I can learn a lot from such young directors, who are battling only with their screenplays.”

Expressing his desire to work in the industry for another 20 years, Iwashiro stressed the necessity to work with up-and-coming new directors. “You have to be versatile in order to survive,” he said. “There needs to be an element of the modern, but also a sense of the classical, the universal. This is the balance I always try to strike in my work.

“I want to make music that crosses the borders of countries,” he concluded. “It is my dream to score a film that completely substitutes music for dialogue, and is able to be understood universally by all.”