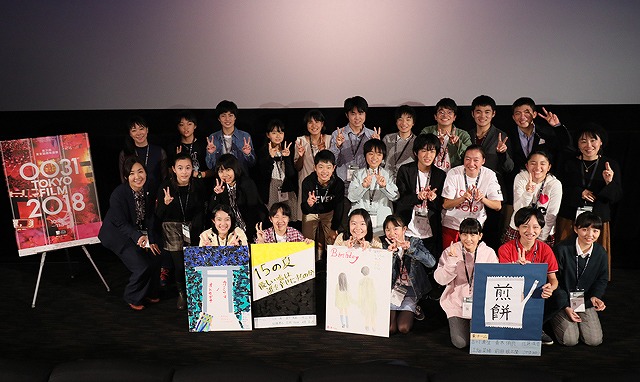 “I don’t believe there are ‘amateur’ filmmakers and ‘professional’ filmmakers. There are just people that want to make movies.”

It was with that sentiment that director Akiko Ooku summed up the hard work of the students who took part in the 31st TIFF’s filmmaking workshop Teens Meet Cinema. The workshop, which is in its second year, pairs up veteran filmmakers with middle-school students and, over a nine-day period, lets their imaginations roll.

“We pair the kids with mentors, but it’s really the kids making the films,” said a producer in charge of the workshop. “We let them know that the mentors will share their own opinions, but that they don’t have the ‘answers.’”

This time around, the lead mentor of the project was the aforementioned Ooku, whose film Tremble All You Want won the Audience Award in the Competition section at last year’s TIFF.

Ooku’s guidance — and the hard work of teens passionate about movies — culminated in the creation of a series of short films that saw their world premiere in front of a packed house on October 28.

The first of those shorts, A Friend of Kamisama, is a summertime ghost story about children who enter the grounds of a local shrine, never to return. The short employs the traditional Japanese children’s song “Kagome Kagome” to brilliantly creepy effect — and the finale features a twist worthy of the horror greats.

“When we were location hunting, we found the shrine, and its atmosphere really set the tone… it was a stroke of good luck,” said team member Soichiro Kimoto.

The second short, Senbei – Rice Cracker, marked a change in tone to comedy. A lazy student on summer break is told by his mother to shape up — and ends up taking things too far, creating a second-by-second schedule, including designated bathroom breaks and an Outdoor Activity period.

Nao Ebata, who played the student’s mother, evoked chuckles from the audience when explaining the difficulties of her role: “It was hard to get that ‘mom’ feeling. I’m just a middle schooler, after all.” Onoru Maeda, who played the father, agreed: “I was shot from behind, so I tried really hard to stretch my back to increase my stature.”

The third short of the screening was by far its darkest. Birthday begins with a cheerful birthday celebration, but quickly descends into the dystopian future of 2032, in which everyone over the age of 17 has died of a virus, and a Juvenile Government has set up brutal work camps. Following the screening of the impressively-shot short film, camera operator Maho Saito revealed — to a hearty round of applause from the audience —that the experience had inspired her to become a professional cameraperson.

The final short, Summer -15 Years Old, and subtitled Would thoughtful lies make anybody happy? aims to answer exactly that question, as middle schooler Aoi tells best friend Kaede a white lie that sets off a chain of unintended consequences. In a comment that reflected a deep understanding of the mysteries of filmmaking, Yumeko Sato, who played Aoi, said, “It was so strange to be a middle-school student playing a middle-school student.”

The four teen-produced shorts were followed by a making-of documentary, When a Film is Born, directed by Maiko Yoshikawa. Yoshikawa’s film showed how over the nine-day period, the teens went from exercises meant to stretch their imaginations to actually scripting, storyboarding, shooting and editing their films —and how they discovered the magic of filmmaking along the way. Some of the most moving shots of the documentary were the revelatory expressions on the faces of the young men and women as they learned how a single camera move, editing decision or musical due could dramatically alter their films.

Ooku wraps up the making-of documentary with high hopes for the teens, stating, “I can see some of you working within the film industry in the future, and I’m looking forward to that moment.”

After all, these teens’ films have already made a packed auditorium of film festival-goers laugh, gasp and cry — if that doesn’t make them pro filmmakers, what does?