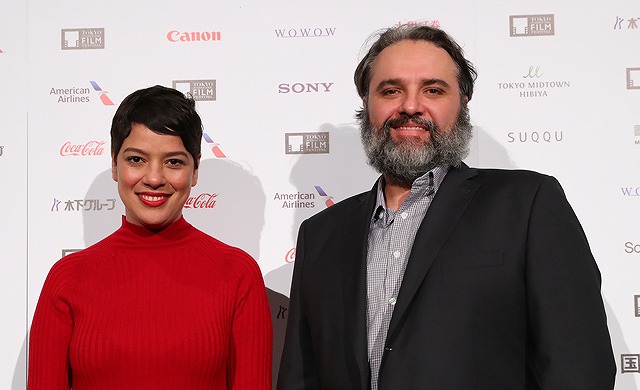 In horror films, children can be both the victims of unspeakable acts as well as the perpetrators, and the terror is multiplied accordingly with the measure of innocence we assign to a child protagonist. The Brazilian film in TIFF’s Competition section, The Father’s Shadow, which screened on October 28, centers on Dalva (Nina Medeiros), who isn’t so much precocious as forced into a maturity that’s beyond her understanding.

Several years earlier, her mother died in an unexplained accident, and her father Jorge (Julio Machado) has never recovered from it. Left in the care of her aunt, Cristina (Luciana Paes), Dalva acquires Cristina’s flair for the occult and makes up her own spells, which her aunt recognizes may be even more powerful than her own. When Cristina’s on-again-off-again lover leaves her, she calls on Dalva to bring him back, which the little girl does. Once Cristina leaves her household, Dalva is essentially in charge of her father, who she has decided is now a zombie, at least as defined by the horror movies she devours on TV. Dalva then decides to bring her mother’s spirit back to comfort her father, but his own demons prove to be beyond her help. In a sense, she has to bring them both back from the dead.

At the post-screening press conference, director Gabriela Amaral Almeida professed her affection for horror films. “In Brazil I watched horror movies on TV as a child, just like Dalva,” she said, “and she is partly based on me. Fear is a powerful emotion that connects people. We are all afraid of dying, and that fear keeps us attracted to horror stories, but also to human dramas where people confront their fear. The fabric of a horror plot could be woven very easily into the fabric of my dramatic story. The horror movies Dalva watches mirror her reality, which is that death is not very far from her.”

Some reporters wondered if the film was a pure horror film, or a representation of Dalva’s dreams and fantasies. Almeida said, “I think we all decide our own reality, and in this case the female characters have a more fantastic grasp on reality, which is a common thing in Brazil, where mysticism is blended into everyday life. The father in the story is materialistic.” Jorge works in construction, where the stoical macho culture wounds him both physically and spiritually. When his best friend dies in an accident, he wonders if it was really a suicide, unable to steel himself for another bout of grief. “He doesn’t have faith,” explains Almeida, “but sometimes you can turn faith into reality.”

For his part, producer Rodrigo Sarthi Werthein noted that he has worked with Almeida over the course of several short subjects, and when he saw the script for the film, “I finally decided this would be our first feature together.” He also pointed out that Brazil was about to have a presidential election that could destroy everything his country’s film industry stands for. “What makes Brazil beautiful is our diversity,” he said. “All of that is at risk, because if this ultra-right candidate wins, he could erase minority voices. Our movie is a product of this kind of diverse culture, and we could very well lose all of that after the election.”

“I’m dying of fear,” Almeida added. “This movie is a product of our culture, and our future as filmmakers is menaced by a candidate who wants to do away with it.”

As Halloween approaches, there are more things to fear than ghosts and zombies.