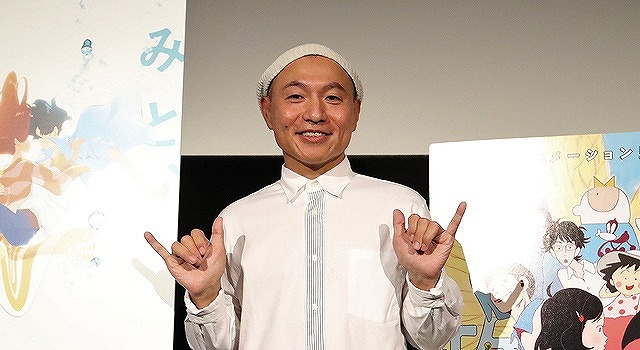 Anime fans willing to brave Roppongi’s crowds of costumed children on the morning of October 28 were in for not one, but two, Halloween treats: an English-subtitled screening of Lu Over the Wall — part of the 31st TIFF’s retrospective honoring animation director Masaaki Yuasa — and the hotly awaited announcement from Yuasa about his next film.

Lu Over the Wall takes place in a small Japanese fishing town that some would call “peaceful,” but that others might call “boring.” That includes protagonist Kai (Shota Shimoda), who has far more interest in making music than carrying on his family’s traditional business.

One day, Kai’s life takes a turn when he encounters Lu (Kanon Tani), a mermaid girl with magical powers — and a serious aptitude for dance. Through their unlikely friendship, Kai and Lu are able to rid the town of a decades-long fear of merfolk, learn more about the meaning of friendship and family, and create some funky beats in the process.

Following a round of applause from the packed theater, Yuasa launched into the Q&A session by divulging one interesting bit of trivia: Lu was not always a mermaid. “This was originally the story of a young female vampire, her family and a young man,” said the director. “It had a bit of an Addams Family flair.”

Yuasa also revealed his primary motivation during the creation of the film. After the release of Mind Game, his debut feature, the director noticed that “people watched it with many different interpretations and feelings, but I felt there were some things that didn’t quite get communicated to the audience. This time, I wanted to create something that would clearly connect with the audience.”

The emcee mentioned the similarities in setting and character between Lu Over the Wall and Ponyo, the 2008 feature from Studio Ghibli’s Hayao Miyazaki. Yuasa acknowledged being inspired by Miyazaki, but stated that his inspiration actually came from the director’s early work Panda! Go Panda!

“As for Ponyo, I actually didn’t notice the similarity until far into production!” Yuasa said with a laugh.

After the Q&A, Yuasa revealed what fans have been waiting for since the release of Lu Over the Wall: the official announcement of his next feature film.

That film, which is tentatively titled Kimito Namini Noretara (tentative title meaning If I Could Ride The Wave With You), concerns a university student and surfer named Hinako who moves to a coastal town and meets a firefighter named Minato. The two begin surfing together and grow close in what Yuasa describes as a “simple love story.”

The director further commented: “Whether it’s in work or life, we often feel like we’re ‘riding a wave.’ We pick our wave and try to ride with it. Flow with it. We don’t know if that wave is going to take us where we want to go until we’re done riding it… In this tough world, it’s about choosing the best wave you can.”

As for protagonist Hinako, Yuasa continued, “I wanted to take a character who’s pure and let them surf.”

Concurring with the emcee that, like Lu Over the Wall, Kimito Namini Noretara has water as a major motif, Yuasa said that while the new film is not a sequel, it does “have some connections” with the earlier work.

Kimito Namini Noretara is expected to be released throughout Japan in early summer 2019. In the meantime, anime fans will continue riding a wave through the filmography of Masaaki Yuasa as TIFF’s Animation Focus tribute to the director continues into next week.