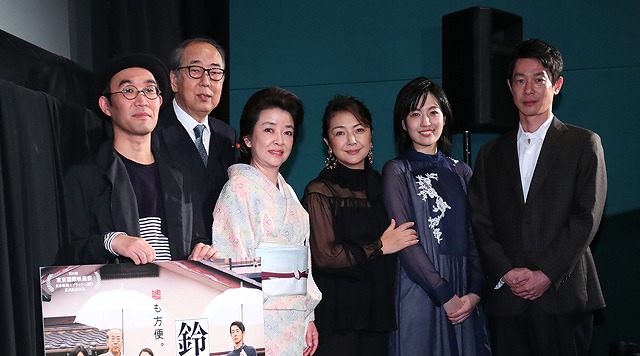 The director and stars of the Japanese Cinema Splash entry Lying to Mom appeared before their first public audience at the 31st TIFF on October 28, appearing for all the world like the film’s Suzuki family themselves.

Making his own directorial debut after years as an assistant director (for such leading filmmakers as Kazuyoshi Kumakiri, Toshiaki Toyoda, Tatsushi Omori, Ryosuke Hashiguchi and Yuya Ishii) Katsumi Nojiri thanked the crowd for turning out, and then apologized for appearing in a casual cardigan, rather than a suit, as his two male stars were sporting.

The film’s best-known actor internationally, Ryo Kase (Outrage, Restless), was all smiles. He told the audience, “About 17 years ago, I met Mr. Nojiri when he was the assistant director for a film that I was acting in. So I’m extremely pleased to be here today for his own directorial debut.”

In the film, Kase plays Koichi Suzuki, a 30-something hikikomori shut-in, living once again in his parent’s home after failing to embrace the rat race. His mother Yuko (Hideko Hara) dotingly tends to his needs, so when she discovers one day that Koichi has killed himself, the shock is so great that she loses consciousness — and her memory of that day. When she awakens in the hospital to see her husband Sachio (Ittoku Kishibe), daughter Fumi (Mai Kiryu), sister-in-law Kimiko (Kayoko Kishimoto) and nephew Hiroshi (Nao Omori), who have all just come from Koichi’s funeral, they are so worried the truth might prompt a relapse in Yuko, they lie to her. In a big way. And the lies just keep snowballing.

At first, Fumi blurts out that Koichi has stopped being a hikikomori and now works in Argentina, thanks to Hiroshi getting him a job. But as Fumi begins forging responses to the many letters her mom sends to Koichi, she learns more about her family — and herself — than she ever bargained for. Eventually, as the family seems to implode with unspoken secrets, the truth must be revealed.

But through it all, there is as much humor as there is grief. Lying to Mom marks an impressively mature writing-directing debut by Nojiri, who helms his veteran cast with expert skill.

Asked what they felt when they first read the script, Kishibe (The Projects, Outrage Coda) said, “Mr. Nojiri wrote the original script himself, which is rare in Japan. It’s based on his real experience, and while it could be considered a tragedy, there was a comic touch to it that was balanced perfectly. So after I read it, I immediately decided that I wanted to do it. I was especially impressed with the scene where I read a letter [from Koichi] in the film. Even in the screenplay, it was impressive. But when I saw the finished film, it was extremely moving.”

Hara, best known overseas for her role as Koji Yakusho’s wife in Shall We Dance?, said, “I actually said yes even before reading the script, so I felt a responsibility. But after I read it, I thought it was a perfect script and I was very happy to be involved.”

Kishimoto, a familiar face from many roles in Takeshi Kitano films, said, “I was like a poisonous flower in this beautiful story. But it’s a really powerful film.”

Kiryu (The Chrysanthemum and the Guillotine), essaying her first leading role with grace and a great depth of feeling, admitted, “I was extremely nervous on the first day of shooting, but everyone was very kind to me, and took me under their wings, so I could face the role. One day, I had a pimple, and Ms. Hara acted like my real mother. She cut fruit for me and took care of me.”

“My second daughter was born on the same day as Ms. Kiryu,” Hara confided, “and I feel like she really is my daughter. It was fate that brought us together.”

Staying in confessional mode, Kiriyu amused the audience by acknowledging, “During the first 10 days of the shoot, I was totally constipated, I was so nervous.”

After the laughter had died down, the emcee asked Kase what it was like working with his old friend as a first-time director. “I knew about the real-life background of the story,” responded the actor, “and I figured out that the character of Fumi was probably the director himself. Through the script, I saw how he felt about his past, and I was really moved. But since I knew him as an AD for so long, it still felt a little funny when I came to the set and he was the director.”

Following its TIFF screenings, Lying to Mom is scheduled to hit Japanese theaters on November 16.