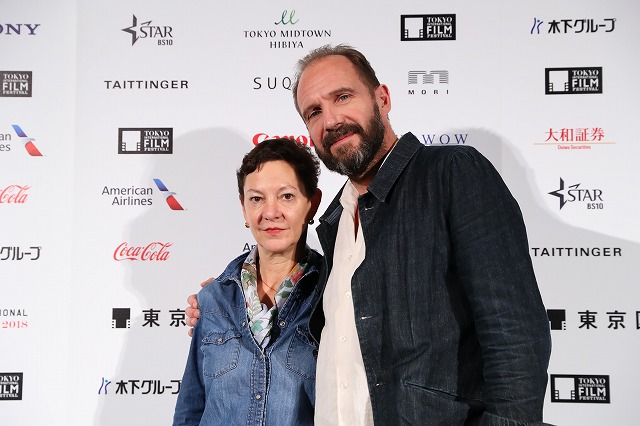 While continuing to rack up an enviable record of critically lauded performances in commercially successful films, from Schindler’s List to Harry Potter, Ralph Fiennes has twice before taken time out to direct his own films, Coriolanus and The Invisible Woman. That he would decide next to mount a gorgeous, sweeping quasi-biopic of legendary Russian ballet dancer Rudolf Nureyev was not exactly predictable.

But as he told the press prior to the Asian premiere of his new film, The White Crow, playing in the 31st TIFF Competition section, “When I came across the story, I thought immediately that [Nureyev’s] defection, and his youth leading up to it, would make a compelling film, because it carries so many themes, of self-realization, of freedom, and in the context of the Cold War, ideological conflict in which the individual has to claim themselves.”

Expanding on each with a casual eloquence, Fiennes explained, “I felt how the defection happened and all the strands within it were an extraordinary event. At one point that morning [in Le Bourget Airport], he was lost. Clara Saint, who was called late, just as she is in the film, saved him by going to the immigration police. What you see in the end sequence is pretty authentic. The film is also about friendship. There’s that wonderful line written by David [Hare, the renowned screenwriter], about how there’s no individual who doesn’t depend on anyone. Nureyev was an egotistical man who would take friendships when he needed them. It’s one of the aspects of his personality that is arguably not attractive. But I felt that there was a pure spirit within him, despite these ugly aspects. What struck me at Le Bourget was that the power of friendship had sustained itself. He’s hurt Clara Saint yet she forgives him, she redeems and rescues him and is the agent of his freedom.

“Of course,” he added, “there is also the context of the political system at the time. It was important to David and I that the ideology behind the Soviet system was given honor. The scene with the bureaucrat, in which he says to Nureyev, ‘The state has paid for your education, who do you think you are, not willing to go back and dance for your own people in your hometown?’ We wanted to make that a persuasive argument, and show that the world of Leningrad, the ballet world, nurtured Nureyev as a dancer, and gave him a family and a home. He was a robust, extreme individual who provoked the system.”

When Rudolf Nureyev defected from the Soviet Union at the height of the Cold War in 1961, he had just won the gold-standard Nijinsky Prize at the age of 23. The White Crow opens in the aftermath of the defection, in a drab office in Moscow, where the ballet star’s mentor, Alexander Ivanovich Pushkin (played by Fiennes himself, in convincing Russian), attempts to explain why the dancer simply had to leave. Nureyev had studied under him at the leading Vaganova Academy of Russian Ballet in Leningrad (now St. Petersburg), and lived with him while recuperating from a fractured leg.

Although not told chronologically, the film focuses on Nureyev’s early life: the hardscrabble childhood, starting with his birth aboard a Trans-Siberian train near Irkutsk in 1938, through the years of intense training and striving for perfection, and the life-changing visit to Paris as part of the Kirov Ballet, culminating in his unpremeditated decision to seek asylum in France, to the moment that he utters the words “I want to be free.”

During the troupe’s five-week stay in the City of Light, Nureyev befriends French dancer Pierre Lacotte (Raphaël Personnaz) and Clara Saint (Adèle Exarchopoulos of Blue Is the Warmest Color), whose recently deceased lover was the son of André Malraux, France’s minister of cultural affairs, which comes in handy when the star seeks political asylum.

Real-life dancer Oleg Ivenko, in his first film role, channels Nureyev in an uncanny performance, convincing both as the passionate dancer and the temperamental man, a sophisticate who spends an inordinate amount of time in art museums, studying the great works of art, as well as in the cafes and nightclubs of Paris.

Asked how he had found him, Fiennes responded, “He’s a very strong dancer, but as Gaby knows, I was insistent that we find a dancer who can act. Nureyev is so well known, so well documented, and when I read the screenplay, it was clear that it was more than dancing scenes, it was a great acting role. I was hesitant to cast an actor who would have to learn ballet; I’d had to have body doubles and it would’ve been too time-consuming. After a big search in Russia, Oleg was one of four or five actors on a short-list. I felt he had a proximity to Nureyev physically, he had an instinctive understanding of screen acting. He’s very intelligent and the camera loves him. You put a camera on him and you want to watch. That’s the quality of a movie star.”

The film’s producer, Gabrielle Tana, explained, “The initial idea was that Ralph wasn’t going to act, he was just going to direct. But for the commercial value of the film, he came around to understanding that if he was in it, it would be to the benefit of the project. His performance is so extraordinary in it, and there’s something so poetic about watching him be a teacher of this young dancer who was becoming an actor.

“It’s a great privilege to watch a great teacher teaching a young man to become an actor, to watch the whole process and see how Oleg was absorbed in it,” she continued. “I think he’s now more interested in becoming an actor than pursuing his dancing. That’s what this experience did for him. It creatively recalibrated him, he’s learning English very seriously. It has been transformative; he has a confidence that he didn’t have before. Ralph really gave him a great gift. But I hope next time he can just direct.”