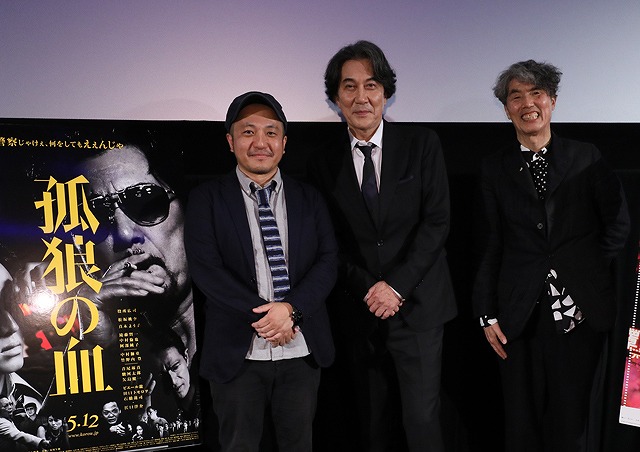 Director Kazuya Shiraishi and star Koji Yakusho appeared after the screening of The Blood of Wolves on October 26th at the 31st TIFF, section, where the legendary actor is being honored as the Japan Now Actor in Focus.

In the film, veteran detective Ogami (Yakusho) and his new partner Hioka (Tori Matsuzaka) investigate the disappearance of a missing gang-connected accountant, they find themselves caught up in the middle of a brewing gang war.

Ogami is a loose cannon who abuses his position of authority and even seems to be in cahoots with one of the gangs. Yakusho, who is no stranger to playing compromised cops (see 1997’s Cure, also playing at this year’s TIFF), gives a visceral performance as a man willing to bend the rules to serve his own ends. “I am the detective/keeper of justice,” Yakusho quipped.

The Blood of Wolves evokes the shot-on-the-fly aesthetic and brutal violence of Kinji Fukasaku’s Battles Without Honor or Humanity series of true-crime films, and Shiraishi acknowledged that he was aiming for a certain Showa “flavor” that only Yakusho could provide. “Showa era guys have a certain smell or flavor that Heisei guys just don’t have,” Shiraishi told the audience. “Mr. Yakusho can really bring out this smell or ambiance, like when he played a bad-ass yakuza in Shabu Gokudo (1996). From the beginning, I thought he would be perfect for the role of Ogami.”

The setting in The Blood of Wolves has been moved to the 1980s, but much like Fukasaku’s classic series, it is based in Hiroshima. Shiraishi’s film takes as its perspective the cops (instead of the yakuza) who attempt to corral the unruly street gangs, but the lines between the two become blurred. “My idea for the character was that he was a bad, but pure-hearted detective,” said Shiraishi, “but after filming the first scene, Mr. Yakusho asked me, ‘I’m playing a yakuza, right?’”

Yakusho imagined a cool, hardboiled character after reading Yuko Yuzuki’s novel, on which the film is based, but his initial impressions changed after reading Junya Ikegami’s screenplay. “He became a lot more hardcore,” said Yakusho. “An angel who walks around town spitting in the street.” But he was also drawn to the fatalistic aspects of the character: “He’s living his life thinking he might die at any minute, and I found that very interesting.”

Shiraishi responded that underneath Ogami’s rough persona was a warm person whose kindness was “brought out by Mr. Yakusho’s natural character.” The director said this was by design. “I don’t think humans are so cleanly black or white. We occupy a gray zone,” he explained. “Of course, there are some wonderful people out there, but even they probably think, ‘Boy, I’d like to kill someone’ when they’re having a bad day. I think that’s what humans are and that’s why I want to make characters like that.”

Yakusho echoed this sentiment: “Humans are multifaceted, and there is meanness and kindness, good and evil in every person. That’s what makes humans interesting, and that’s why Ogami as a character was very appealing to portray.”

When asked how he is able to depict such starkly different characters from film to film – from the wild Ogami to the genteel woodsman of Shuichi Okita’s Woodsman and the Rain, also screening in the Japan Now tribute – Yakusho referred to his international breakout year in 1996, when the films Shall We Dance?, Sleeping Man, and Shabu Gokudo were released. “I played two pretty similar characters in Sleeping Man and Shall We Dance? in succession, so I was aching for violence by Shabu Gokudo,” said Yakusho. “It’s fun for an actor to play such different roles, but I imagine the audience might also enjoy seeing utterly different characters as well.”

One fan asked the actor how he is able to return to his normal self after playing such intense roles. “For me, when the film wraps, that character goes away,” Yakusho answered. “But my wife is more sensitive. If I take my work home with me, she’ll tell me ‘Hmm…I think you’ve brought someone strange home.’”