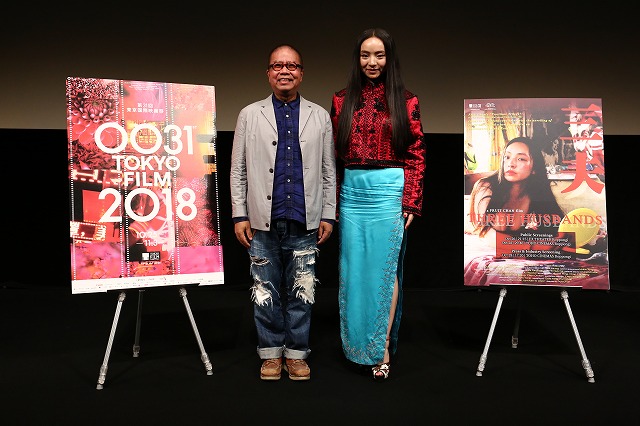 Acclaimed Hong Kong director Fruit Chan, making his first TIFF appearance in 17 years, took to the stage following the world premiere of his new film, Three Husbands, at the 31st TIFF on October 26. With him was a much slimmer version of the woman who appears in nearly every scene, Chloe Maayan.

On the Red Carpet the day before the premiere, she had revealed that she gained 18 kilos for the role, which required her to be mostly nude, in various states of lustful abandon, throughout.

The new film is the final in the director’s so-called “Prostitute Trilogy,” following Durian Durian (2000) and Hollywood Hong Kong (2001). TIFF Programming Director Yoshi Yatabe asked the first and most obvious question: “What took you so long to complete the trilogy?”

Chan answered, “The reason is simple: I shot it because I wanted to have a trilogy. When I started shooting Durian Durian 17 or 18 years ago, so much was going on politically in China, which influenced Hong Kong greatly. A lot of young girls were going into the business, and I decided they would make a good subject for a film.”

“Simple” is perhaps apt, but also misleading. While Three Husbands focuses on Mui, an insatiable woman living on a cramped fishing boat, where she is constantly pimped out by her three ostensible caretakers (one of whom may actually be her father, as well as the father of her infant son), its increasingly outré sex scenes are clearly Chan’s way of satirizing contemporary Hong Kong.

It is also clear that something more is wrong with the woman, Mui, than just her superhuman libido. She is barely able to talk, her eyes roll around strangely in their sockets, and beyond her outrageous sexual antics, she can barely summon the energy to do anything else. There are strong hints that she may be a mermaid of sorts, an indigenous or magical being. “Mui is basically handicapped, and that is how we have to view her,” explained Chan. “I think it’s natural that the handicapped also have desires.”

In an intensely uninhibited performance, Maayan tackles this object of exploitation straight on, fully committed to making Mui both corporeal and otherworldly. Did she have any doubts about taking on the role? “In a way, I think it was fate that I met the director,” she responded. “We first met over 10 years ago when I was still a teenager. When I saw him again a decade later, he said that I had become an adult. He told me the story of the film without asking me to be in it. Then two weeks later, he called and asked me, and everything went really fast after that.”

Added Chan, “I had seen her in other films and I knew what a great actress she was. So I waited 10 years, and the timing was right for her to be in my film. I feel that waiting for a great script and waiting for a great actor is the same thing. Without this character, she wouldn’t have been in my film. I’m very grateful to her and I think she was very courageous to be in the film. I haven’t properly thanked her for that, so I would like to take this opportunity to do so.”

Asked about whether there had been any difficult moments during production, the director responded, “We had a lot of difficulties shooting, especially as pertains to three things. We had to shoot on the water in that boat. The boat was very small, and we had problems finding places to put the camera so that it wouldn’t fall into the water. We were also worried our crew members would fall into the water, so we had to make sure that everyone on the crew could swim. Finally, we had the baby, and it’s not easy for infants to act. But it was even more difficult to work with the parents of the baby, since the baby was in some sexy scenes. Chinese tend to be very conservative.”

Asked about the color of the film, which gradually loses tone until it seems to have become nearly monochromatic, with only splashes of vivid highlights, the director said, “This is the age of digital technologies, so I played with technology to express what I wanted to express. Because the film is split into three sections — Sea, Land and Nothingness —I felt that the color of Nothingness would be like a void.”

It should be noted that Nothingness arrives just as Mui and her three husbands float past the multibillion-dollar Hong Kong-Zhuhai-Macau bridge, which just opened in the Pearl River Delta, and realize they don’t have a home anymore.