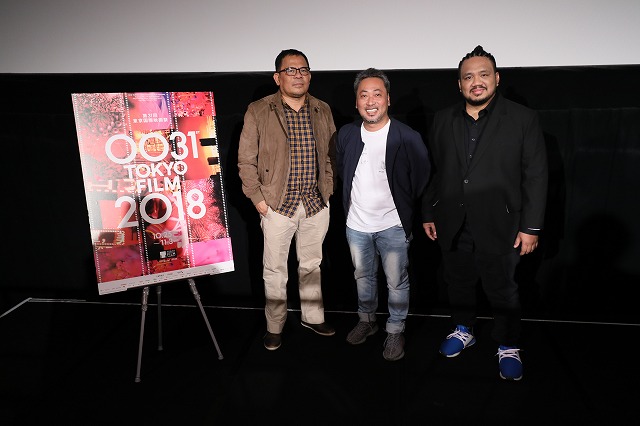 The theme of this year’s Crosscut Asia, the fifth since the TIFF section was launched, is the close relationship between music and film.

Usually when we think of these two ideas together in relation to Asian cinema, we think of India and Bollywood. But as the three Southeast Asian directors who participated in the TIFF symposium on Soundtrip Cinema on October 26 explained, music has always been an integral aspect of filmmaking throughout the region.

Western film fans will say the situation is the same in North America and Europe, but the “musical film” in those two regions is an isolated genre. In Asia, music is naturally integrated into movies as a matter of course, according to the directors, because entertainment forms are not so narrowly delineated.

“The Vietnamese love music and love to sing and recite poetry,” said director Nguyen Quang Dung, whose film Go-Go Sisters portrays a group of former high school friends who reform their old musical group to cheer up a member who has been diagnosed with cancer. “We really love karaoke. When a man proposes to a woman, he does it in song. When I write a script for a movie I do it to music. My favorite movies are musicals, because the songs make you understand the deeper meaning of the story.”

If the idea of characters breaking out in song sounds like a function of fantasy, Asian movies, at least as entertainment, rely on music to convey vital and realistic themes, even when those themes are political in nature.

Garin Nugroho, whose Indonesian film, Chaotic Love Poems, is a kind of Romeo and Juliet story set in two different time periods and thus two different musical milieus, is meant to remind people not only of the music of these two eras—the 70s and the 90s—but the political situation that gave rise to the songs.

“The story is itself a memory of those times,” he said. “And the history of each song has a background. Indonesian culture is an oral tradition, not written, so songs can express history and the sentiments of the people.”

In Nugroho’s estimation, music can be an instrument of oppression, but by the same token it is also the perfect medium for anti-authoritarian expression, although it often comes through in subtle ways that non-Indonesians may not pick up on.

Nugroho’s and Nguyen’s movies are basically nostalgic. Treb Monteras II’s Philippine feature, Respeto, conversely, is up to the minute, a hip-hop fable about a “battle rapper” who forges a relationship between the country’s “martial law past” and its “current war on drugs,” which Monteras explained has killed thousands of people, both dealers and users, since President Rodrigo Duterte took power in 2016.

“I use music to get young people into theaters,” he said. “If I just said it was about martial law or extra-judicial killings, they wouldn’t come, but if you make it seem like 8 Mile they might be interested.”

The emcee mentioned that in all three films the shadow of the U.S. hovers above the political realities of the countries in which they are set, as well as the music. All three directors agreed that American culture is impossible to ignore.

As far back as the 1920s, said Nugroho, Indonesian cinema was influenced by American music, even if it wasn’t strictly American. “Hawaiian music was a big part of early Indonesian cinema,” he said. “The costumes, even the names were influenced by Hawaiian music.”
Monteras said, “Of course, American disco was influential in the 70s, as well as rock and new wave. Hip-hop came later, but now we’re trying to make it our own. Now it’s all about the poetry, not the beats. And the rhymes are political and social in nature, because that’s their main appeal. Battle rap artists can become hugely popular overnight through social media.”

Nguyen pointed out that Vietnam has been influenced by three separate invasive cultures: Chinese, French and American. “Songs were restricted after the war ended in 1975. Until 1979 they were mostly propaganda. But since then, Vietnam pop has entered a golden age, which is why I purposely used songs in my film that were released between 1975 and 2000.”

Said Nugroho, “Film for me is a passionate statement. Every time I make a film I understand I have to say something important, which is why I choose songs to make those statements. There’s nothing more powerful than music.”