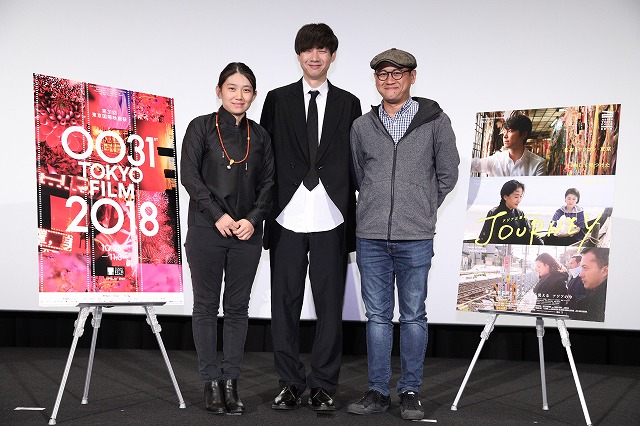 Following the world premiere of Asian Three-Fold Mirror 2018: Journey at the 31st TIFF on October 26, the three young directors appeared onstage to field questions from the audience, which filled the largest theater at the Toho Cinemas complex in Roppongi.

The second co-production between TIFF and the Japan Foundation Asia Center, the omnibus film found its eponymous theme of “journey” — signifying both physical travel as well as travel beyond time and space — through Skype discussions between the three directors, Degena Yun from Inner Mongolia, China (Latitude 52, A Simple Goodbye), Daishi Matsunaga from Japan (Pieta in the Toilet, Hanalei Bay), and Edwin from Indonesia (Blind Pig Who Wants to Fly, Postcards from the Zoo).

Yun’s The Sea is a road movie about a mother and daughter (Jin Chen and Zhe Gong) traveling somewhere by car together from Beijing, bickering constantly, until their destination is finally revealed, provoking an unexpected emotional response.

Matsunaga’s film Hekishu is set in Yangon, Myanmar, where a Japanese engineer (Hiroki Hasegawa) has gone to assist in the building of the new rapid-transit railway. After befriending a local seamstress named Su Su (Nandar Myat Aung), he begins questioning his role in the modernization.

In Edwin’s Tokyo-set Variable No. 3, an Indonesian couple (Agni Pratistha and Oka Antara) stay at a Tokyo guesthouse run by a mysterious man (Nicholas Saputra) who first peeps on them, and then offers to provide training to improve their relationship.

The first question demonstrates how viewers can contribute to new interpretations that have eluded the creators themselves. Addressing the film’s title, a woman asked whether triangular relationships were also meant to be a theme of each film, along with “journey.” Asked by the emcee, Kenji Ishizaka, Programming Director of TIFF’s Asian Future and CROSSCUT ASIA sections, to explain, the interlocutor said, “In Edwin’s film, of course it’s a main theme. But also in The Sea, the daughter is talking on the phone with someone, maybe with her boyfriend, while the mother mentions the husband. In Hekishu, the protagonist is attracted to the young [seamstress], while he also has a girlfriend back home.”

Degena Yun, director of The Sea, responded “I never thought of it that way. But I think it can be seen as a triangular relationship between the mother, the father and the daughter.”

Daishi Matsunaga, director of Hekishu, said, “I placed the protagonist in between Myanmar and Japan, and Su Su embodies Myanmar. I didn’t see the protagonist’s girlfriend in Japan as representing Japan; but there is a struggle of being in between.”

Asked whether the directors had specific reactions after viewing the films on the big screen, Yun admitted, “It’s the first time I’ve seen the whole film with subtitles, and I worry that it’s not easy for international audiences to understand my film. I wrote a lot of dialogue and the subtitles maybe didn’t reflect all of it.”

Edwin, who was seeing all three films on a big screen for the first time, said, “I think they’re all sharing the same feeling, in terms of the characters. Together, the films give a much bigger picture of what kind of world we’re living in, the loneliness, the struggle, the relationships between characters. That’s something we all shared.”

Noted Matsunaga, “I paid a lot of attention to the sound during editing, because it’s very distinctive in Myanmar. Color is also very distinctive there. In cinema, sound makes a lot of difference, unlike when you’re watching TV. So I hope audiences will listen to my episode, as well as watching it.”

Because the first co-production omnibus, Asian Three-Fold Mirror 2016: Reflections, included a work by Cambodia’s Sotho Kulikar, who is female, another audience member asked whether it was a conscious decision to include a female director in the second installment. Emcee Kenji Ishizaka answered, “As one of the producers, I can say yes, it is partly conscious, because it offers a different viewpoint. But the idea was to include an up-and-coming director who had received a Japan Foundation award at TIFF, and both of the women [Kulikar and Yun] were winners.”

After its second screening at TIFF, Asian Three-Fold Mirror 2018: Journey will open on November 9 in Tokyo before expanding elsewhere in Japan and around the world.