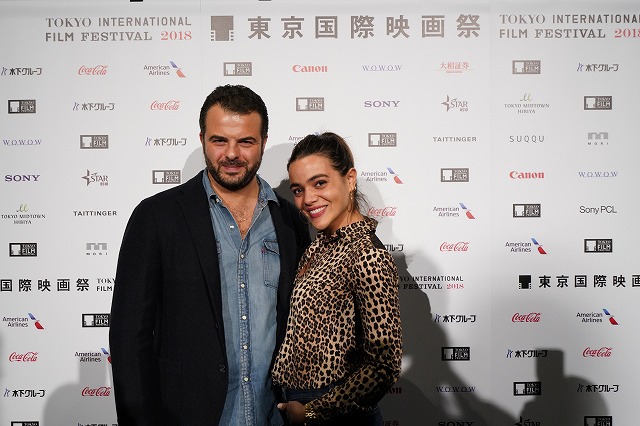 The setting is Castel Volturno, a dilapidated riverbed town north of Naples that seems to have borrowed many of the dangers and depressing color of its larger southern neighbor. Maria (Turco) makes a living transporting surrogate African mothers across the Volturno River, where they are paid to bear children in a shack for delivery to unidentified wealthy clients. When one of the mothers disappears, Maria must track her down; in the process, she begins to question her role in the scheme and her own place in a crumbling society.

Several different social issues in contemporary Italian society – prostitution, child trafficking and the plight of African refugees – coalesce in the Volturno riverbed, which is a stand-in for many such bleak areas around the Italian countryside. “You can see such areas now,” explained De Angelis. “They are often populated by refugees who have escaped war, but also even regular citizens who are out of work. Some of the people there become prostitutes, some of the children are sold off, and no one knows what becomes of those children. There are many regions like this around the country.”

Women and their babies are bought and sold, but in a unique twist, the sellers in the story are all women as well. The operation’s matriarch plays the role of mother in one scene, ruthless mob boss in another, while a terrifying skinhead midwife brandishes a cattle prod when herding her mothers to the delivery room. “I wanted to depict a world where men have lost their traditional roles,” said De Angelis. “Women in this world take up the role that men have traditionally shouldered. But I also wanted to deconstruct the concept that woman equals weakness. Women have positive and negative aspects – here they are both the exploited and the exploiter – and I wanted to depict these two sides.”

The director’s own upbringing might also have played a role: “I have been raised by three women, so that also might explain my stance on how I depict women in my films,” he said.

Turco plays Maria with a tough, intense resilience worthy of many a great neo-realist actress. In preparation for the gritty role, she underwent rigorous physical training. “I would come home from work and be incredibly tired,” said Turco, “but it was actually less stressful than a role that only requires my mind. In working with Edoardo [who is also Turco’s husband], we decided that she must be a character that expresses herself not through her words, but through her body.”

Early in the film, Maria realizes that she, too, is with child, and the film tracks her developing pregnancy. “Maria’s body changes throughout the film,” said Turco, “so it was essential to show how she changes as well. But I was thankful for the opportunity to play this role, as using your body prevents you from over-intellectualizing the character.”

Maria’s body is also damaged from a childhood trauma, and the moral dilemma of the story centers around her decision to have the child or not, as a birth will likely kill her. “This is the one big decision that Maria has to make in her life, and this decision will ultimately humanize her,” said Turco. “It is the journey that brings her to this choice that makes it important; the choice makes her into who she wants to be. By making this decision, she becomes fully human and she finds herself. And through this decision, she is able to show the world what kind of human she really is.”