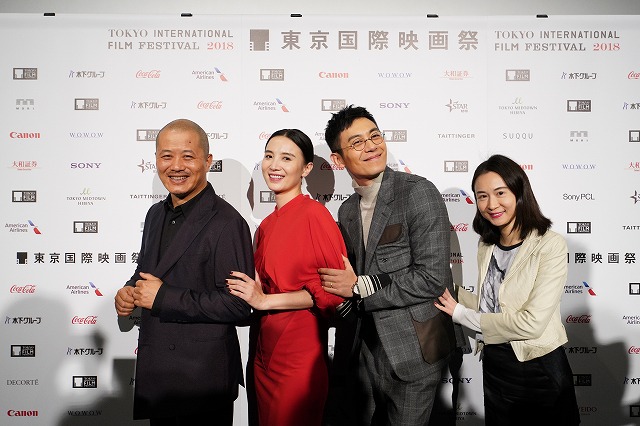 A passionate, tragic love story unfolds during a time of turbulent economic and political changes in The Poet, a film directed by China’s Liu Hao (Back to the North) that is making its world premiere in the 31st TIFF Competition section.

The film begins in the 1980s in a mining town in northern China, in the period between the Cultural Revolution and the market-based reforms of the 1990s. Among the mine’s many working-class comrades, Li Wu—played with fascinating ennui by Zhu Yawen—sticks out for two reasons: one, for the doting, almost mother-like affection he receives from his wife, Chen Hui (Song Jia) and two, because he’s recently had a poem published in a national poetry magazine.

With that success, Wu becomes the pride of the town, and receives the perks afforded to a published poet: he’s given a position in the propaganda office, far from the daily dangers of the mine, and is assigned to greet famous poet Zhang Mu (Zhou Lijing) when he comes on a visit.

But Wu is uninterested in all the attention. His main obsession in life, it seems, is Hui, and her wool leggings, which he playfully unravels throughout the film. When Wu’s poems stop being published, and he loses his job in the propaganda office thanks to his lack of work ethic, the doting Hui devises an elaborate plan to get him back on top. While she succeeds, after a fashion, she also plants the seeds that eventually cause the couple to unravel—not unlike her leggings.

Front and center throughout The Poet are the performances by Zhu Yawen and Song Jia, who joined director Liu Hao and co-executive producer Ivy Ho, for a press conference on October 26. Speaking about her character Hui, Song said: “Even after we finished the film, the character stuck with me for a long time. I’m very happy we were able to make such a wrenching love story… it’s not often that you can find roles like this.”

While the relationship between Wu and Hui is front and center, The Poet’s background is filled with a wide cast of characters, from contract miners to party officials, attempting to make the best for themselves—through honest means or otherwise—in a China reeling from economic changes.

Asked why he decided to focus on the China of the 1980s and 1990s, the director responded, “I experienced this period myself, and I still think it’s fascinating… People experienced anxiety going through those societal changes. I wanted to portray the ways they lived through them.”

As China followers are well aware, the country has gone through almost unimaginably rapid growth since the 1980s, so to portray a mining town of the period required building a massive set from scratch. Co-executive producer Ivy Ho explained that a significant portion of the film’s US $2.2 million budget went towards the creation of that set, while Liu added that it took an entire three months to build. It was worth the effort: multiple members of the press visiting from China remarked how much it reminded them of those years.

Naturally, the press conference couldn’t end without a question about the motif that runs throughout the film: Hui’s wool leggings. Song reflected that because she’s from China’s cold northeast, she wore such leggings herself when she was young, and remembers her mother and aunt spending long hours knitting them.

Zhu, meanwhile, summed up their metaphorical significance: “The leggings are a symbol of love between the couple. As Wu unweaves them, it expresses the emotions between the two.”

It was a suitably poetic explanation for this Competition film.