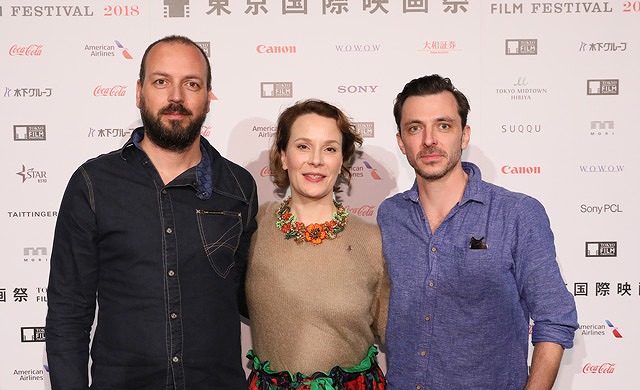 A man travels from Hungary to track down his long-lost father and ends up discovering much more, including, but not limited to, the secrets of the universe in His Master’s Voice, an out-of-this-world film playing in the 31st TIFF Competition section.

Appearing at a press conference on November 1, director György Pálfi said, “We tried to go beyond the traditional Hollywood style and really take a step forward in storytelling.”

The film begins as protagonist Peter (Csaba Polgár) and girlfriend Dora (Diána Kiss) visit New York City from Hungary. The trip is ostensibly part of Dora’s work, but Peter has another agenda—learning more about his father, who disappeared suddenly in the 1970s, heading to the US when Hungary was still behind the Iron Curtain. Peter and his brother Zsolt (Adam Fekete) have discovered that the scientist may have gone on to take part in a secret US government research project involving gamma rays, which resulted in the deaths of three people.

They’ve tracked him to Colorado, the home of the research facility, and after some detective work and a confrontation at a party, Peter finally reunites with his father, Hogarth (Eric Peterson), who has adopted a new identity and started a new family.

That family welcomes Peter into their home, but what initially seems like a happy reunion begins to melt down as Zsolt, on Skype from Hungary, continues to press his estranged father about his role in the gamma ray experiments. Eventually, it’s revealed that the original purpose of the research was not to build a weapon, but to try to respond to a communique from outer space, or what Hogarth dubs the “voice of God.”

Meanwhile, in a parallel story that plays out in the far-flung future, an earth spaceship has reached an alien home world, and is attempting to establish contact. Ostensibly, the aliens are the origin of the “voice of God” message — or are they? And doesn’t one of the ship’s crew members look a lot like Peter?

A simple plot summary doesn’t do justice to His Master’s Voice, which is marked by a creeping, paranoid aesthetic created through a combination of found-footage montages, left-field hallucinations and a haunting electronic soundtrack. The atmosphere evokes psychological sci-fi films like Darren Aronofsky’s Pi or Andrei Tarkovsky’s Solaris, and the latter is no coincidence—like that classic, His Master’s Voice is based on a novel by Polish writer Stanislaw Lem.

“I like his novels very much and wanted to adapt one,” Pálfi told the press. “It didn’t matter much which one, but from a budget perspective, this one had the most minimal story, so it was the cheapest,” he laughed.

The director went on to explain that the novel contains the story of the scientist trying to decode the alien signal, but that he and screenwriter Zsófia Ruttkay added the family element because, “I wanted it to be more personal.”

Actor Csaba Polgár, also in attendance following the screening, agreed the family story helped make the film more relatable: “I’ve had problems with my father, too. I mean, who hasn’t? That helped me find a lot of emotional connection to the character.”

TIFF marked the world premiere of His Master’s Voice, and Pálfi took the opportunity to share the Japanese influence on the film: “We’re really happy to be here, because we tried to learn a lot from Japanese movies,” he commented. “Not just big directors like Kurosawa and Ozu, but anime. I think some of the best screenwriters out there are living in Tokyo and writing anime shows.”

Screenwriter Ruttkay added: “Tokyo is one of my favorite cities because it reminds me of how small I am! That helped me to write the script a lot.”

Indeed, for a film that takes places on scales as micro as the atomic level and as macro as the universe itself, it’s hard to think of a better place to premiere His Master’s Voice than the megalopolis of Tokyo.