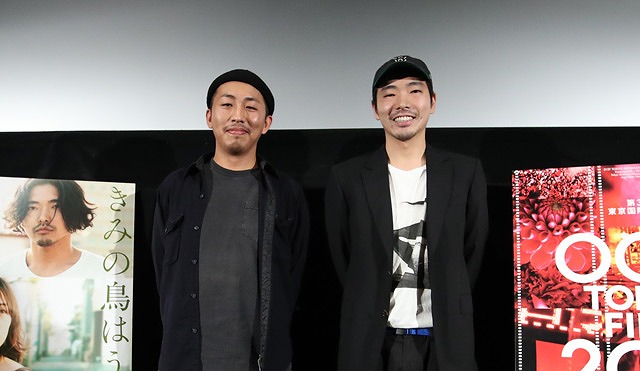 Director Sho Miyake (Playback, The Cockpit) and lead actor Tasuku Emoto (64, Dynamite Graffiti) were on hand for a Q&A session on November 1 following the screening of their film And Your Bird Can Sing, playing in the 31st TIFF Japan Now section.

The nameless protagonist of the film, “Boku” (or “Me,” played by Emoto) works part-time at a bookstore in Hakodate, Hokkaido and shows little interest in or commitment to anything. When not at work, he spends most of his time at the local pub with his roommate, Shizuo (Shota Sometani), with whom he also shares a bunkbed. He hooks up with a co-worker, Sachiko (Shizuka Ishibashi), who is also having an affair with their boss, and the two begin an ambiguous relationship “without drama.” Boku, Shizuo and Sachiko start hanging out together, and the three spend their nights partying in dance clubs, pool halls, darts bars and the guys’ cramped apartment. Eventually, however, Sachiko takes a romantic interest in Shizuo, testing the limits of Boku’s nonchalance.

During the Q&A, the director explained that the project started through the support of the Hakodate Cinema Iris and took over three years from start to finish. “It’s not a time where we can pump out movie after movie,” explained Miyake. “The fact that we were able to realize the project was kind of a miracle.”

Based on a 1982 novel by Yasushi Sato, Miyake’s film moves the story to present-day Hokkaido. “We didn’t want to half-ass the era,” explained Miyake, “so we made it very clear that it’s a contemporary story and emphasized the core elements related to the characters that were universal and timeless.”

The nameless blank slate “Boku” helped in this transition between eras, and while the character is hard to read, Emoto plays him with a simple earnestness. “I didn’t want to be vague with my character,” said Emoto, “as my character and the movie would become too ambiguous. Since we had a lot of time in between shooting, I had time to think about who ‘Boku’ is. So what I latched onto was his candor; I tried to be straightforward with the other characters when I spoke or looked at them. Even if my character might be lying to himself, I wanted to be direct in my interactions.”

Emoto’s character doesn’t use a lot of words to communicate his feelings, and part of this was by Miyake’s design. “The novel is obviously far more descriptive, but there’s no purpose in doing the same thing in a film,” said Miyake. “So the characters illustrate their feelings through their body language.” Emoto also echoed this sentiment, conveying the primal nature of many scenes. “When we were shooting, much of the acting seemed to be in reaction to some sound or action,” he recalled.

The three main characters spend most of their time reacting to the sounds of Hakodate’s nightlife scene, much of which is shot with a naturalistic, fly-on-the-wall lens. “It’s an everyday story, so we wanted to be true to reality and convey a natural vibe,” said Miyake.

Some such scenes seem to carry on exceptionally long, and Miyake explained that the film was aiming to recreate the feeling of the novel and its depiction of normal life. “There are movies like Mission Impossible that are entirely focused on the realization of an incredible number of goals,” he said. “But Sato’s novel describes the little moments that happen before or after the goal, the hesitation one feels, for instance, when deciding in which direction to throw a ball. I wanted the audience to feel that additional time that we have in life other than the time related to our goals.”

Such scenes are peppered throughout the movie, in the lovely way the three characters go home while sharing a single umbrella in a downpour, or in the sweet moments Boku and Sachiko share trying to become intimate on a cramped bunk bed. It helps that Shizuka Ishibashi is a naturally vibrant presence, and the director admitted he wanted to bring out her smile and capture it on film. “She is such a down-to-earth person and doesn’t put up any emotional walls,” said Emoto about his costar. “A big reason why I was able to be Boku was because Ishibashi was Sachiko.”