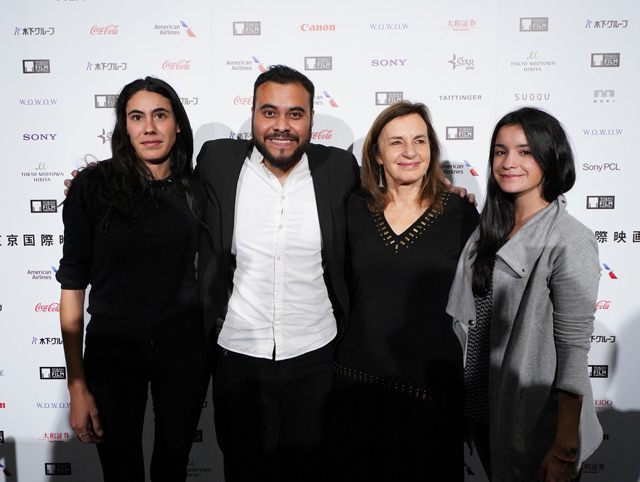 In the Mexican film History Lessons screening in the Competition section at the 31st TIFF, Vero (Veronica Langer) is a 60-year-old high school history teacher who has cancer. She has only two things in her life: her job and her family, and neither seems to give her much joy any more, if, in fact, they ever did. Her husband sleeps on the couch every night when he isn’t playing video games on his phone, and her school has decided to ask her to retire early because of her illness. Crushed by this last straw, Vero takes her frustration out on a new girl in her class, Eva (Renata Vaca), an encounter that leads to violence — and a very unusual relationship.

Though this relationship isn’t romantic in any way, it’s definitely all about love, but a love based on specific needs: Renata needs Vero’s help to get an abortion. At first her reticent cool is off-putting, but Vero is soon attracted to Renata’s honesty, which is deeper and more complicated than the usual adolescent candor. Though History Lessons is similar to many cancer-themed films to a certain point, it ends up in a slightly different place, but is no less effective for it.

During a post-screening press conference on October 31, director Marcelino Islas Hernandez explained that History Lessons is the last part of a trilogy that looks at sadness. “It is a love letter to myself, and to the people I love,” he said. “It’s an attempt to show how people love under sad circumstances.”

One reporter commented that he was pleasantly surprised, since people often associate Mexican movies with drugs and violence, while this was about two women coming to terms with who they are. “I understand what you mean,” the director said. “But I want to make films that are closer to my own life. I’m a big fan of Yasujiro Ozu, because I think his movies are about life as we live it, and not just the way Japanese people live it. And I love making movies about women. My father left us early, so I was brought up by women. Vero and Renata possess the kind of strength that only women have.”

Veronica Langer was also in attendance, and received effusive compliments for the on-screen chemistry between her and Renata Vaca, who was acting in her first movie. In real life, Vaca is one of Mexico’s most popular YouTubers. “I didn’t know her at all two years ago when we started filming,” Langer said. “She was inexperienced and we had to rehearse many times, but soon we formed a bond that showed on screen. The thing is, we really enjoy each other’s company.”

Hernandez added, “I was happy with how the chemistry worked out. There was one scene where Vero and Eva are dancing, and I could never quite get it to my satisfaction. Then Renata just pulled Veronica into the scene and took over. It was like she was pulling this older woman into her life—and into her own life.”

One reporter was fascinated by the film’s use of cigarettes, which, despite her illness, Vero chain-smoked, and Coca-Cola, which Eva is always drinking. “I think Coca-Cola and cigarettes are the best film props, and maybe I use them too much in my films. All my main characters are smokers. Smoking adds atmosphere automatically. And, personally, I love Coke, and I used it to connect these two characters in subtle ways.”

“But I’m not trying to promote Coca-Cola,” he immediately insisted. “Still, after this film, maybe I can make a deal.”