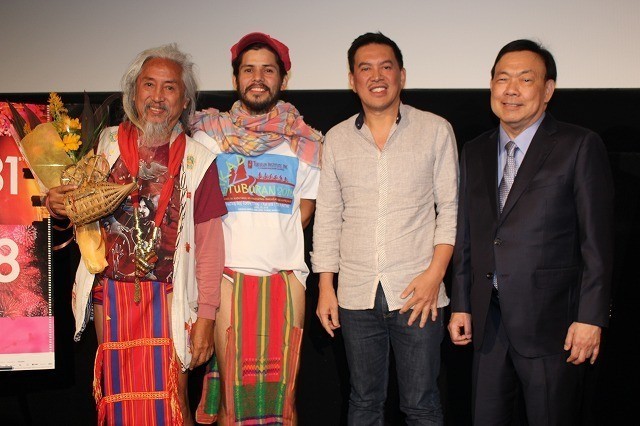 The film was produced to commemorate the centennial anniversary of Philippines’ cinema with the three internationally renowned directors, Lav Diaz of “The Woman Who Left”, Brillante Ma Mendoza of “Ma’ Rosa” and Kidlat Tahimik of “Why Is Yellow Middle of the Rainbow?” The unified theme for the omnibus films is “Journey” and are composed with three pieces of『Hugaw（Dirt）』by Diaz which tells a story about the three coal miners who witness the mystical experience in the deep jungle. 『Defocado（Defocused）』by Mendoza depicts the farmers of Mindanao Island who suffered landgrab. 『Lakan Ni Kabunyan（Kabunyan’s Journey）』by Tahimik is a documentary which describes the family trip.

Brillante Ma Mendoza who also served as the executive producer of “Lakbayan” (Journey) said, “We launched this film project wishing to express the gratitude to the “films” made over the last 100 years.” Kidlat Tieng who also provides opportunities for film presentations to the independent filmmakers through the establishment of Sinag Maynila Film Festival said, “Approximately one year and a little while ago, I heard about the idea of this film from Brillante. The project was to gather special directors and have them collaborate to make films at the special historical moment. I thought the idea was wonderful.”

The news was announced about Tahimik been granted with the most honorable title in the Philippines Art World, “National Artist”, (Officially granted on 10/25). Receiving the flower bouquet Tahimik said, “As far as I know I have been here from the 1st Tokyo International Film Festival. I have been granted with the new title, but I haven’t changed since then. I still respect the Asian culture very much,” he said revealing his innermost thoughts. “I have a close relationship with ethnic groups of Philippines. I truly value the old culture even if the society becomes modernized. The environment will not be destroyed if you have such beliefs,” he said deeply from her heart.

Mendoza who was assigned to give an ending speech said to the audience, “I would like to thank you all, but before that, I would like to request for the performance.” Encouraged by Mendoza, Tahimik responds “I didn’t bring the instrument.” He shows embarrassed grin but begins to sing and dance supported by his son Kidlat De Guia on the stage. In the end he showed the camera made of bamboo and clicked the button. Tahimik said “This camera is made for Asia. Let’s don’t lose to the power of Hollywood and listen actively to indigenous sound of Asia.