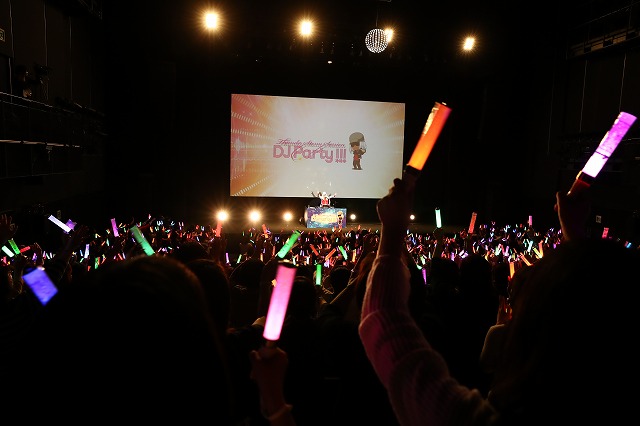 On October 30 at Roppongi’s EX Theater, the 31st TIFF hosted a special TIFF Plus screening of KING OF PRISM -PRIDE the HERO-, the latest title in the KING OF PRISM anime series which, since its debut just a few years ago, has inspired a legion of passionate fans.

If anything, “passionate” is putting it mildly. As screening time approached, hundreds of fans, many in PRISM cosplay, excitedly prepared, pulling out light-up batons and handmade signs from their bags. One woman could be overheard saying, “my heart is beating out of my chest!”

As the lights went down and three of the film’s voice actors took to the stage for an appearance before the screening, the crowd went wild, waving their batons and screaming in unison. You’d be forgiven for thinking you’d been transported back to 1964 and the arrival of the Beatles in America.

“You know, when KING OF PRISM debuted,” said Junta Terashima, who plays Shin Ichijo, “there weren’t nearly this many people at events… it’s amazing so many people have responded to the series.”

There were a few exciting announcements for PRISM fans: first, the next chapter of the franchise, Shiny Seven Stars, would be kicking off with a film in March 2019; second, DJ Koo — who joined the three voice actors on stage — would be playing sets following monthly PRISM showings at Shinjuku’s Wald 9 theater.

As the crowd went wild at the news, DJ KOO remarked, “I’ve never actually played a set after a movie, so don’t get too excited yet!”

But the filmgoers wouldn’t have to wait long to see the DJ’s post-film debut: he was scheduled to perform after this very screening in an event entitled Thunder Storm Session DJ Party!!! (exclamation points included).

As the guests left the stage and the film began, the fans’ light-up batons remained on. That’s because this was no ordinary TIFF screening: it was a “cheer screening,” in which fans were free to cheer, scream and conduct call-and-responses with the dialogue, which many had clearly memorized line for line.

KING OF PRISM is centered around male pop groups that participate in the Prism Show, a televised competition that’s equal parts song, dance, ice skating and futuristic light performance. In PRIDE the HERO, the heroes, who make up the group Edel Rose, must take on a shady organization called Schwartz that’s vying for Prism Show supremacy using underhanded tactics like buying the rights to Edel Rose’s most popular song.

The film, which unfurls at dizzying speed, tracks the individual members of Edel Rose overcoming adversity as they train for the Prism Show. It concludes in glorious fashion with said show, an over-the-top extravaganza in which only one competitor can be crowned King of Prism.

The assembled crowd — who hooted, hollered and joked throughout the film — already knew who would wear the crown, but that didn’t stop them from experiencing the pure catharsis offered by PRIDE the HERO all over again. Doing it in a theater packed with fellow fans only heightened the excitement.

As the screening came to a close, the revved-up fans were treated to the promised set by DJ Koo, who spun KING OF PRISM hits as EX Theater was, for an evening, transformed into the hottest club in Roppongi.