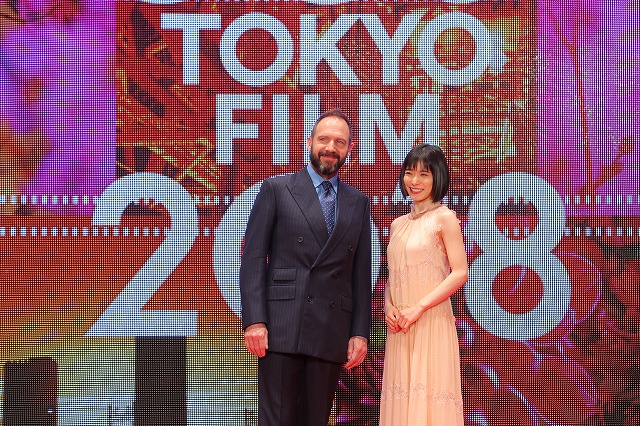 The 31st Tokyo International Film Festival kicked off its 10-day run under clear autumn skies on October 25, with hundreds of fans turning out to greet filmmakers and stars as they arrived for the TIFF Opening Ceremony. Alighting from hybrid cars and descending the grand carpeted staircase into the Roppongi Hills Arena, the guests stopped to sign autographs as they walked along the red carpet.

The event kicked off with Festival Ambassador Mayu Matsuoka, a popular actress who starred in the 30th TIFF Audience Award-winning film Tremble All You Want, as well as Hirokazu Kore-eda’s Cannes Palme d’Or winner Shoplifters. She was greeted by TIFF Festival Director Takeo Hisamatsu, before welcoming the crowd to the festival’s main venue and wishing them happy viewing.

There are nearly 200 films in this year’s festival lineup from around the world, and most of them were represented on the red carpet.

International star Koji Yakusho, the Japan Now Actor in Focus, was accompanied by two of the directors whose works will be featured in the section, Shuichi Okita (The Woodsman and the Rain) and Kazuya Shiraishi (The Blood of Wolves). Masaaki Yuasa, whose acclaimed work is the subject of the Animation Focus, arrived without his famous wool hat, but with life-size characters from his visually inventive films.

Many major Japanese stars were on hand, including from Special Screenings, Sota Fukushi and Alice Hirose, of The Travelling Cat Chronicles, and Sho Aoyagi, Nobuyuki Suzuki and Mariko Tsutsui of Jam; and from Japanese Cinema Splash, Issey Ogata, who plays the titular character in The Manga Master, Nijiro Murakami, star of The Gun, and Ryo Kase, Nao Omori and Ittoku Kishibe from Lying to Mom.

Along with Godzilla, star of the Closing Film GODZILLA: The Planet Eater, there were characters from the TIFF Plus section, including Kumamon, Love-chan and Happy-kun; and there were also playful moments when director Nobuhiro Yamashita arrived with Roboo, the robot star of his sci-fi bromance Hard-Core, showing in Special Screenings.

The 15 emerging female directors who created films for the Japanese Cinema Splash section omnibus film 21st Century Girl, led by producer-director U-ki Yamato, descended the red carpet en masse with many of their stars, setting a precedent for representation of a single film, as well as for their kaleidoscopically patterned dresses.

Other major guests included directors Isao Yukisada (River’s Edge) and Manabu Oda (Saimon and Tada Takashi), whose films are featured in the Japan Now section; the team behind the unstoppable juggernaut One Cut of the Dead, a microbudget megahit; representatives from the CROSSCUT ASIA #05: Soundtrip to Southeast Asia lineup, including Philippine hip-hop artist Abra, star of Respeto; and an array of directors, producers and stars from the films being shown across TIFF’s sections and allied events.

The Opening Ceremony, held in the spacious Toho Cinemas Roppongi Hills, beghan with popular drumming group Drum Tao, after which Minister of State for Cool Japan Strategy and Intellectual Property Strategy Takuya Hirai spoke. Ryohei Miyata, Commissioner of the Agency for Cultural Affairs, then noted: “I believe Japanese films are among the best in the world. After Yasujiro Ozu, I think we’ve had a long line of wonderful Japanese directors. I would like to share these words by the great actor Ken Takakura: ‘Film goes beyond borders and has a hidden force to change our lives, giving us hope and courage.’

TIFF Festival Director Takeo Hisamatsu then welcomed all the participants, noting, “We had a record number of 1,809 entries in the Competition section this year, from 109 countries and regions. We have added a new venue in Hibiya, and more collaborative events comprising fashion and animation to expand diversity. On a personal note, let me say that I’ve been working in the film industry for 40 years, and I’ve never once regretted my career choice. Watching movies has always encouraged me, and I’ve been able to make friends all around the film.” He then declared the festival officially open.

Festival Ambassador Mayu Matsuoka appeared next, and emphasized, “I believe film crosses many borders and has helped me get through many things in my life. As an actress, I’ll continue to do my best. Please enjoy the films at TIFF.”

Actress Shinobu Terajima then took the stage, as a special guest of the Opening Film A Star Is Born. “It’s been awhile since I participated in TIFF and I’m very happy to be here tonight,” she said. “I had the pleasure of watching the film, and although it’s a very simple story, a very melancholic love story, I think Bradley Cooper has done a marvelous job of directing it. Lady Gaga apparently connected the character to her own life. We all love Lady Gaga in Japan, and know her for her eccentricities. The way she portrays the role, before she becomes a star, is so authentic and real, I have newfound respect for her.”

Star Koji Yakusho, the Japan Now Actor in Focus, then appeared. “I’m truly grateful that these five films [selected for the section], shot over the past 20 years, will be shown,” he said. “I think you’ll enjoy seeing me age in these roles. I realize I’ve been acting for 40 years now, and I have a lot of memories of all the casts and crews I’ve worked with. These five films were directed by wonderful directors, so I hope the theaters will be filled. I will be there for Q&A sessions, so it’s a great chance for me to talk directly with the audience.” Yakusho then admitted that he doesn’t watch his own films, claiming he “doesn’t like my face. But I’m looking forward to watching them in my old age.”

Acclaimed actor-director Ralph Fiennes, attending with his third directorial effort, The White Crow, said, “I’d like to say how honored I am to be here for this wonderful festival. Thank you for making myself and my producer Gabby so welcome. I’d like to also welcome all the international visitors here. It’s a great privilege for all of us, especially in this country which has such a splendid tradition of filmmaking.”

He concluded, “Cinema is dependent on the ideas and spirit of the young, and I’d like to add my encouragement to all the young filmmakers out there, who will be bringing all their insights to the cinema of the future, and wish them success for tomorrow.”

Mendoza commented, “I am deeply honored and moved to be named as the head of the jury of the Tokyo International Film Festival. I accept this honor on behalf of my country, the Philippines, as well as all the people who work in film — the writers, directors, producers, casts and all the crew. I also share this responsibility with the other members of the jury, and I’m sure we are all in synchrony about our mission. I hope that this competition will serve as a reminder that filmmakers can effect change in telling our stories.”

The Tokyo International Film Festival will be showcasing films from around the world and other film-related events at Roppongi Hills and other venues from October 25 – November 3.