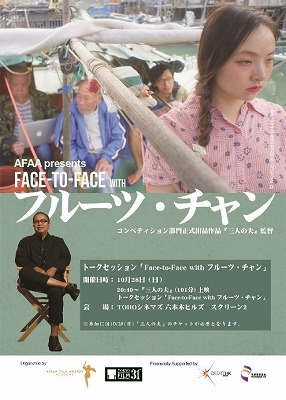 Tokyo International Film Festival (TIFF) has announced that TIFF and the Asian Film Awards Academy (AFAA) will co-present the “Face-to-Face” special talk event with an internationally acclaimed veteran director and producer Fruit Chan at 31st TIFF on October 28. The special talk event is under masterclass series organized by the AFAA.

Director Chan is bringing his latest work, Three Husbands, to TIFF’s Competition Section, which will have its world premiere on October 26.
“Face-to-Face with Fruit Chan” will follow its second screening on October 28, moderated by Kenji Ishizaka, Asian Future Programing Director of TIFF.

At the event, we will look back at Chan’s outstanding career, upcoming projects, casting of new talents and other aspects of filmmaking that have distinguished his work as one of Hong Kong’s internationally recognized directors.

This event will be co-presented by the 31st TIFF and the Asian Film Awards Academy (AFAA), and financially supported by Create Hong Kong and the Hong Kong Film Development Fund of the Hong Kong SAR Government. 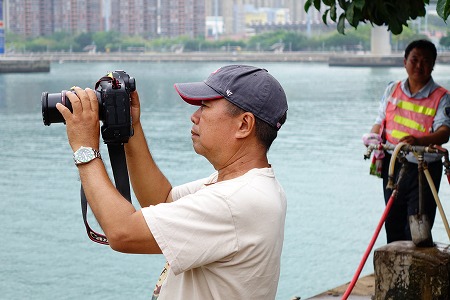 Born in Hainan, China, in 1959, Fruit Chan is a Hong Kong-based director, screenwriter and producer. In 1997, Chan directed landmark indie drama Made in Hong Kong; his The Longest Summer (1998) and Little Cheung (1999) completed his “Handover Trilogy”. Three Husbands is the final chapter in his “Prostitution Trilogy”, following Durian, Durian (2000) and Hollywood, Hong Kong (2001).

Three Husband
Mui suffers from a medical disorder that will drive her mad if she doesn’t have sex all the time. Her father marries her off to an elderly Hong Kong fisherman. Making the best of a bad situation, the two men pimp her out. Little Bro falls in love with Mui after a wondrous sexual experience and later becomes her third “husband”. Amongst the three, he is the most learned and has every reason in the world to criticize the others. But for the sake of bringing Mui happiness, Little Bro follows in the other men’s footsteps and becomes her co-exploiter too.

Hong Kong Film Development Fund
The Film Development Fund was first set up by the Government of the Hong Kong Special Administrative Region in 1999 to fund projects and activities which contribute towards the development of the Hong Kong film industry, including part-financing small-to-medium budget film productions; enhancing efforts to promote Hong Kong films in the Mainland and overseas; enhancing initiatives to train talents in various aspects of film production and distribution; and enhancing the interest and appreciation of Hong Kong films by the local audience. For more details, visit www.fdc.gov.hk/tc/services/services2.